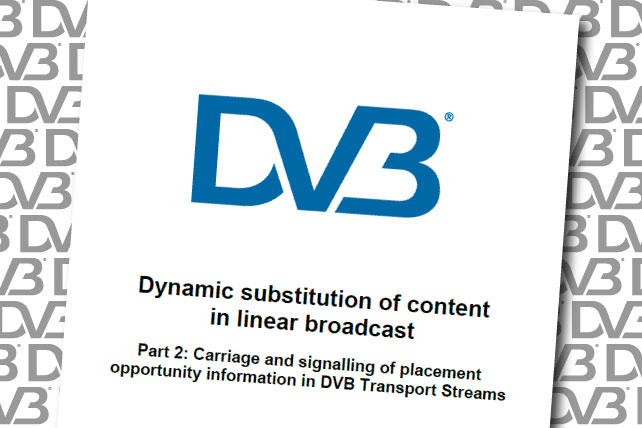 Steering Board approves specs for DVB-TA signalling and Multicast ABR

The 94th meeting of DVB’s Steering Board, held earlier this month, approved the publication of three BlueBooks, including two that will ultimately lead to new ETSI standards.

DVB BlueBook A178-2 is the signalling specification for DVB Targeted Advertising (DVB-TA). It complements the specification for interfacing and preparation of media, published as BlueBook A178-1 last November. Broadcast signalling is needed for targeted advertising to indicate precisely the start and end boundaries of the broadcast service segment that can be replaced. This replaceable segment is referred to as a placement opportunity.

The HbbTV Association, with which DVB cooperates closely, also published its targeted advertising specification this month. It was developed to address those commercial requirements from DVB that relate to the interface between a broadcaster app and the TV set or set-top box. The HbbTV-TA specification enables a broadcaster app to control the process of replacing a broadcast advert with a broadband-delivered advert.

The Steering Board also approved a revision of DVB BlueBook A176, the specification for adaptive bit-rate streaming over multicast (DVB-MABR). The reference architecture had already been published in March 2018, but the new version represents the first stable draft of the complete specification. Relevant external organizations will be invited to review it before it is forwarded to ETSI for standardization.

For consumption of the same linear media stream at the same time by a large audience, the number of simultaneous connections to the edge serving infrastructure carrying the same media payloads results in a high degree of redundancy which can be mitigated by the use of multicast packet replication at Layer 3. This version of DVB-MABR focuses on vertical deployments where both ends of the multicast transport are managed by a network operator. The multicast receiver is deployed either at the edge of the network, or integrated into an operator-supplied gateway device such as a DSL router or cable modem.

All DVB BlueBooks and standards are available from our Specification Library.

Having approved an update to DVB-S2X during 2019, with the addition of support for beam hopping, SB94 approved the associated updated implementation guidelines for DVB-S2X. The document has been published as DVB BlueBook A171-2. (DVB will hold a free webinar on beam hopping in DVB-S2X on Monday 30 March.)