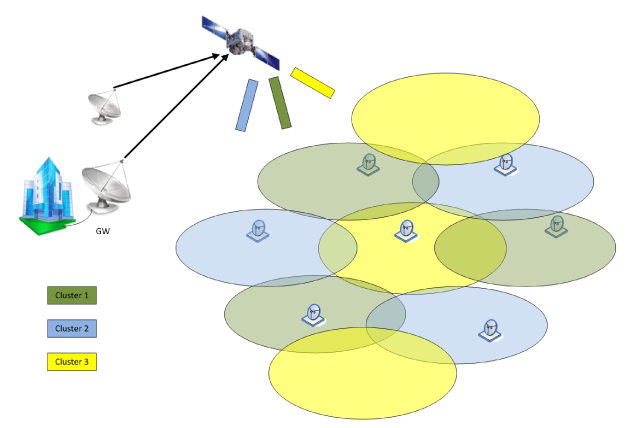 The DVB Steering Board, at its meeting earlier this month, approved a revision of the DVB-S2X specification that adds support for Beam Hopping (BH). In multi-beam satellite systems, BH enables efficient and flexible use of satellite resources for applications such as VoIP, cellular backhaul, Internet of Things, maritime and in-flight connectivity and government.

BH works by grouping the cells covering a given territory in clusters; the cells of each cluster (e.g. the yellow cluster in the illustration above) are visited by the satellite beam (which can be composed of a single carrier signal, or of multiple carrier signals, even with different symbol rates) in successive illumination periods.

The illumination periods may be cyclic and pre-planned or random (i.e. immediately following the traffic demand). Thus, while the “normal” S2X receiver operation mode is continuous, a beam hopping receiver has to operate with “bursty” signals, and this requires the need for a long preamble preceding the useful data payload, to enable receiver (frequency, phase, timing) synchronization. A post-amble is required as well, to allow the satellite beam to switch from one cell to the next.

The optional super-framing structures that enable support of advanced techniques for broadband interactive networks are described in Annex E of DVB-S2X. Three new formats have been added to Annex E, providing the required flexibility to implement BH. The updated specification is available as DVB BlueBook A083-2.

The commercial requirements for BH were finalized by the Commercial Module in October 2018 and  the Technical Module’s TM-S working group started the specification work the following month. TM-S will now undertake further work on verification and validation, and will support development of upper layer signalling for BH within the TM-GBS group. The DVB-RCS2 specification will also be updated and as will the DVB-S2X Implementation Guidelines.