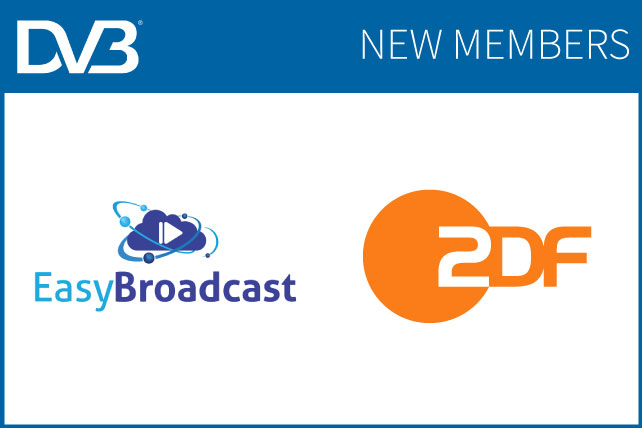 The DVB Project is pleased to welcome two new Members: EasyBroadcast and ZDF.

Headquartered in Nantes, France, and with offices in Paris and San Francisco, EasyBroadcast provides an end-to-end OTT streaming solution enabling the reliable delivery of high-quality video and audio content over the internet or private networks. Through its patented viewer-assisted delivery technology, each viewer contributes to the delivery infrastructure by streaming the content segment they are watching to other viewers.

“For EasyBroadcast, membership of the DVB Project is driven by our commitment to a standards-based approach to the provision of video entertainment, education, and information platforms and services in contexts where and when classic broadband connectivity is a challenge,” said Mohsen Haddad, co-founder and chief revenue officer.

ZDF (Zweites Deutsches Fernsehen) is Germany’s national public television broadcaster. It is run as an independent non-profit corporation under the authority of the Länder, the sixteen states that constitute the Federal Republic of Germany. Broadcasting since 1963, the nationwide channel ZDF is today joined by two thematic channels, ZDFneo and ZDFinfo. ZDF is also a partner in the internet-only offer funk, the German channels PHOENIX and KiKA, and the European channels 3sat and ARTE.

On ZDF’s motivation for joining the DVB Project, production director Dr. Michael Rombach said: “Cooperation with international partners for early identification and co-design of future broadcast technologies is very important for ZDF to optimize quality and develop new kinds of content for our audience.”

With the addition of EasyBroadcast and ZDF, the DVB Project has welcomed ten new Members so far in 2021. Click for the previous announcements: Synaptics and Twise, Quadrille, Netflix and TCL, ASELSAN, and ARD and EKT.