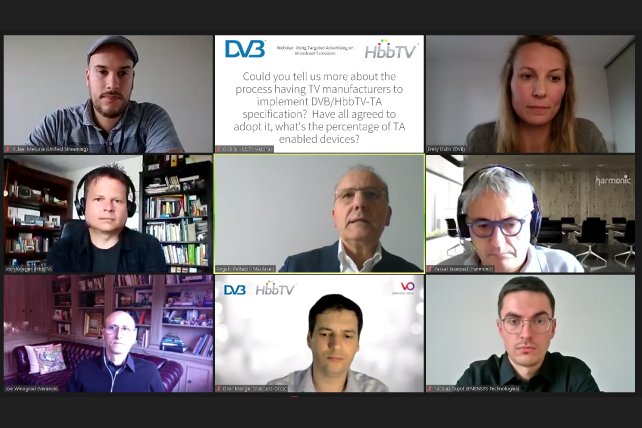 The number of registrations for today’s webinar on Targeted Advertising surpassed any previous DVB webinar, showing clearly that this is a topic of great interest for the industry. It was the second of a two-part series, presented in collaboration with the HbbTV Association, aiming to explain how Targeted Advertising (TA) can be implemented on broadcast television, as well as the benefits it brings.

The first webinar, on 13 April, focused on the opportunities for broadcasters, operators, advertising agencies and their clients. Introducing the topic, Sebastian Busse (smartclip) said: “Traditional TV advertising will need to become fully digital, which means fully addressable.” He explained that, under threat from the burgeoning digital advertising industry, linear television can use TA to fight back and claim a slice of the digital advertising spend by offering the kind of targeting that was previously only possible on online platforms.

Commercial broadcasters across Europe have started deploying addressable advertising over the past five years. Arturo Larrainzar of Atresmedia and Silvia Broggi of Publitalia ’80 talked about some of the innovative campaigns they have been able to offer to advertisers, making use of cross-device capabilities and creative overlays, as well as dynamic substitution.

While the addressable advertising offer has, up to now, relied on proprietary solutions, the arrival of the complementary TA standards from DVB and HbbTV makes it possible to expand and scale the offer to an ever growing population of devices.

Part 2 of the webinar series focused on the implementation of the new standards. It opened with a joint presentation from Nicolas Guyot (ENENSYS Technologies) and Dror Mangel (Viaccess-Orca), who provided an overview of the workflow from end to end, taking France TV as an example. They stressed that making addressable TV accessible and standardized will generate more revenue for all.

Mediaset’s Angelo Pettazzi reinforced this message, explaining why and how his company has migrated from a proprietary solution to one based on the new TA standards from DVB and HbbTV. The new system is more reliable and enables various use cases such as substitution of multiple adverts in the same break, including contiguous adverts.

The final part of the webinar looked to future developments. Joe Winograd of Verance explained how watermarking – already added to the DVB specifications and forthcoming from HbbTV – makes it possible to reach even more viewers with TA, allowing the TA signalling to pass through non-participating operator equipment.

Pascal Jezequel of Harmonic called on all of those involved in the wider addressable TV industry to come together under the auspices of DVB and HbbTV to ensure that TA signalling will be consistent across all platforms, from OTT and streaming to DTT and satellite. Wrapping up, Unified Streaming’s Rufael Mekuria explained how part of this work is already under way in DVB, to ensure that content delivered via DVB-DASH follows the same behaviour and protocols.

You can download the slides presented in Part 1 and Part 2 on the respective event pages.