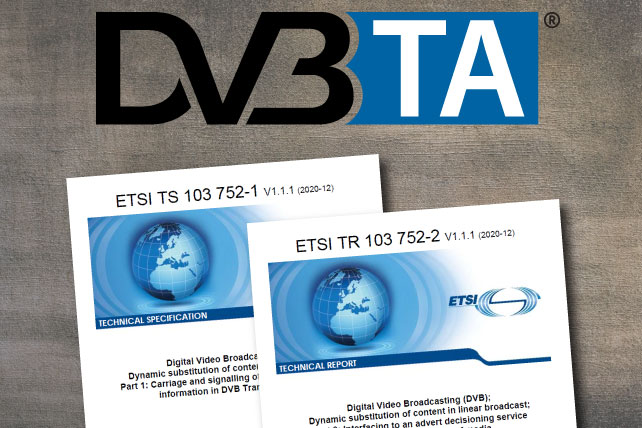 The first two parts of the DVB specification for Targeted Advertising (DVB-TA), enabling dynamic substitution of content in linear broadcasts, have this week been published by ETSI as formal standards. TS 103 752-1 covers Carriage and signalling of placement opportunity information in DVB Transport Streams, while TS 103 752-2 deals with Interfacing to an advert decisioning service and optimal preparation of media.

Several early implementations of DVB-TA technology were demonstrated at the recent DVB DEMOS event, by ENENSYS Technologies, Harmonic, Verance Corporation and Viaccess-Orca. (Click the company names to jump straight to the relevant sections of the live stream recording.)

Further work on the DVB-TA specifications ecosystem continues within the DVB Project. This includes the implementation of SoME (signalling on media essence), where audio and video watermarking are used to signal targeted advertising insertion opportunities, as well as the use of DVB-TA within a DVB-I system.