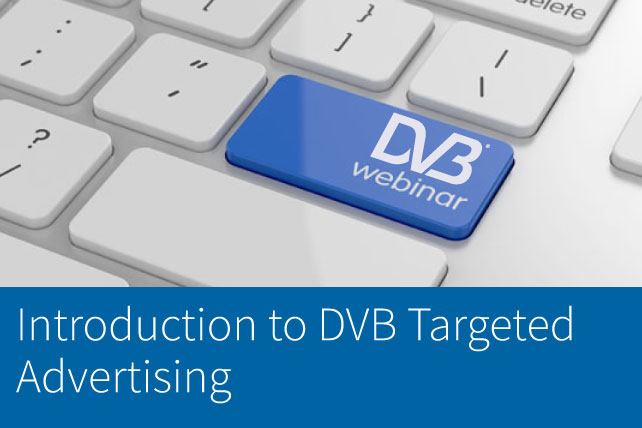 Webinar to introduce the DVB-TA specifications

A new world of opportunity has opened up for broadcasters and the advertising industry with the recent publication of specifications for DVB Targeted Advertising. A free webinar introducing the DVB-TA specifications will take place on Tuesday 30 June at 14:00 CEST.

The combination of two new specifications from DVB and a complementary spec from the HbbTV Association enables the introduction of targeted advertising – based on open standards – in live broadcast television.  For the first time, broadcasters in horizontal markets will be able to provide specific audience groups with customized advertising during commercial breaks, replacing one or more adverts on a channel’s linear broadcast feed, on a screen-by-screen basis.

The DVB-TA ecosystem includes two DVB specifications. The first covers the signalling of the start and end boundaries of the broadcast segment that can be replaced. The second covers the interfacing with advert decisioning servers and the preparation of media for an optimized viewer experience. These are complemented by an HbbTV specification related to the interface between a broadcaster app and the receiver. The HbbTV-TA specification enables a broadcaster app to control the process of replacing a broadcast advert with a broadband-delivered advert.

Join the architects of DVB-TA

Next week’s webinar, which will be available on demand afterwards, will be presented by some of the key people involved in the creation of the DVB specifications.

The presenters are Matt Poole, who chairs the DVB Technical Module working group on targeted advertising; his Commercial Module counterpart Angelo Pettazzi (Mediaset); and Martin Gold (YouView), was the editor of the signalling specification. They will be joined for the Q&A session by fellow DVB-TA expert Peter Neumann (Mediengruppe RTL).

The webinar will begin with a brief look at the commercial background to DVB-TA, followed by an overview of the two new DVB specifications. It will conclude with a sneak peek at some related upcoming work within DVB. Attendees will then have an opportunity to put questions to the panellists.