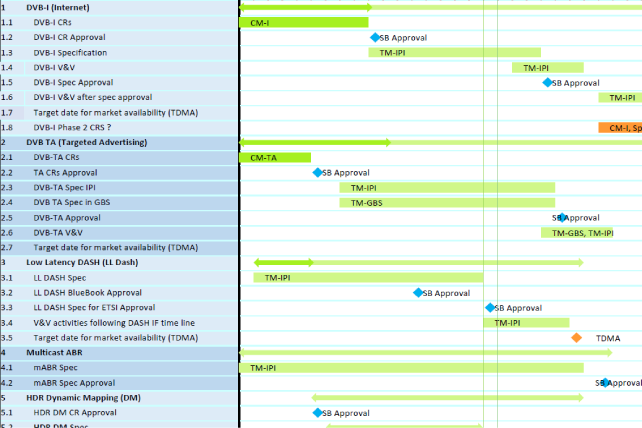 Last week’s 92nd meeting of the DVB Steering Board approved significant revisions to three DVB specifications: support for Beam Hopping in DVB-S2X, further revisions to DVB-DASH and the addition of HDR Dynamic Mapping to DVB’s audiovisual coding specification. A new version of the DVB Workplan was also approved, with an improved format.

Annex E of the DVB-S2X specification has been revised to provide solutions for Beam Hopping. The latter is a technique used in multi-beam satellite systems to enable efficient and flexible use of satellite resources for applications such as VoIP, cellular backhaul and Internet of Things. Publication as a DVB BlueBook will follow shortly, with ETSI publication awaiting work on Verification & Validation plus updates to various supporting documents.

The Steering Board had already approved the addition of Low Latency to the DVB-DASH specification at its previous meeting. However, a further revision of the published BlueBook was approved at SB92, including support for HDR Dynamic Mapping and alignment with developments in MPEG around low latency. DVB BlueBook A168 will be updated and the specification will be sent to ETSI for publication as a revised version of TS 103 285, (pending any final editorial changes arising from the ongoing MPEG meeting).

DVB’s workplan is updated three times per year and published following meetings of the Steering Board. The latest version adopts a Gantt chart approach, providing more detail and clarity. It is publicly available for download from the DVB website.

The next DVB Steering Board meeting is on 12 November 2019 in Geneva, with the General Assembly on the following day. The latter will include the election of a new SB for 2019–2021.