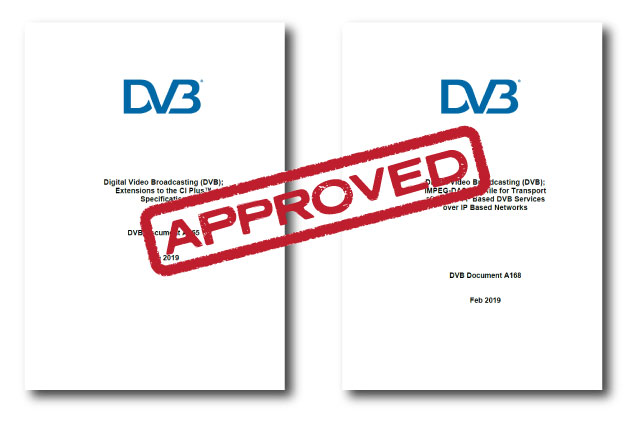 The DVB Steering Board met in Geneva this week and approved updates to the DVB-DASH specification and the DVB Extensions to the CI Plus specification. Both documents have been published as DVB BlueBooks.

BlueBook A168 is the latest revision of the DVB-DASH specification for the streaming of DVB services over IP-based networks. It addresses the need to reduce the delays experienced when watching live OTT content. The Commercial Requirements for low latency stated that the specification should support an encoder-to-screen latency of 3.5 seconds when used over a high performance network connection.

Much of the latency introduced in streaming services is due to the length of the segments used and lack of confidence in the delivery network. Players only start when they have more than one segment buffered and tend to buffer several segments. For low latency, segments are broken into smaller chunks.

Low Latency DASH will be a key enabler for future DVB-I services, enabling a user experience comparable with regular broadcast.

The work has been undertaken in cooperation with DASH-IF (DASH Industry Forum). While the DVB BlueBook is publicly available now,  it will not be forwarded to ETSI for now. A further revision is scheduled for July, by which time MPEG will have finalized extensions to the DASH specification itself to signal low latency.

The Steering Board also approved BlueBook A165, DVB Extensions to the CI Plus Specification. The most significant change is the addition of overt watermarking, an optional feature that provides a secure protocol to display a line of text over video from a scrambled service. Its main purpose would be to display subscriber identity over the video. The solution is supported for both broadcast and IP-delivered content.

The first generation DVB CI specification, which is implemented using the PCMCIA slot, was the basis of the CI Plus specifications, maintained by CI Plus LLP. Since 2014, DVB has published extensions to CI Plus V1.3. The newly approved Bluebook A165, which will become ETSI TS 103 205 V1.4.1, also incorporates some changes that had originally been published as BlueBook A173-2.

The programme for DVB World 2019 includes presentations on both Low Latency DASH and DVB-I.