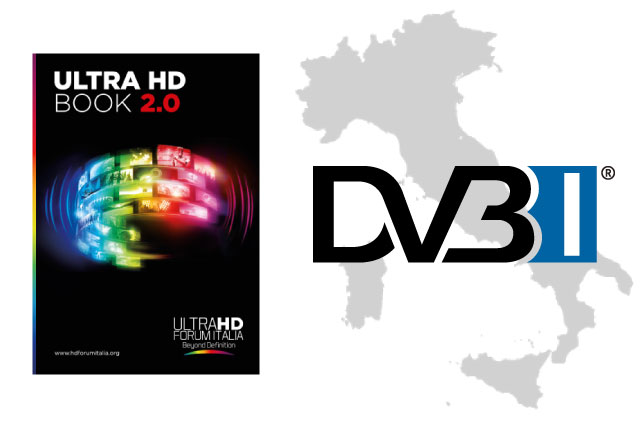 The latest version of the Italian UHD Book, published earlier this month, introduces the prospect of mandatory support of DVB-I in receivers. While the requirement is subject to the fulfilment of several preconditions, the step is nevertheless a strong endorsement of DVB-I as a key element of the future media ecosystem.

The UHD Book 2.0, published by the HD Forum Italia, is the latest addition to the Forum’s collection of technical specifications aimed at manufacturers of television receivers (set-top boxes and TV sets). It sets out the baseline requirements for the Italian digital television platform, which aims to be open, horizontal, interoperable and hybrid.

While earlier editions of the UHD/HD Book had included support for IP-based delivery of linear services, the new version specifies the mandatory inclusion of DVB-I, the specification for internet-centric service discovery and programme metadata. As stated in section 7.3 of the new publication:

“The aim of the DVB-I specification is to support the discovery of TV services and their associated service and programme metadata via the internet. These TV services can then be listed, received and displayed by connected receivers (e.g. TV, STB, PC, tablets, smartphones) with the same ease of use as RF-based broadcast linear TV services.”

The changes introduced by the UHD Book 2.0 target the post-2022 horizon, when Italy will have completed the transition from DVB-T to DVB-T2 for terrestrial broadcast. It does not, therefore, immediately introduce new requirements for the certification of devices on the Italian market – the so-called bollino mark – but rather anticipates the evolution of the market over the next decade towards what the HDFI calls “holistically multi-platform TV”.

Recognizing that the introduction of DVB-I would require all parts of the market to have confidence that services will be introduced in a coordinated and stable manner, the mandatory status of DVB-I will be dependent on a number of preconditions set out in the UHD Book. The first, that DVB-I be ratified as an ETSI standard, has already been met. The others are as follows:

As seen at the recent DVB DEMOS event, there is growing momentum around DVB-I, with several companies demonstrating early implementations of products based on the specification.

Use the links below to jump directly to the relevant demos:

In addition to the DVB-I reference client, potential DVB-I implementers can find other helpful resources on the DVB-I Verification & Validation page.

The English version of the Italian UHD Book 2.0 is available for download from the HDFI website. (Registration is required.)