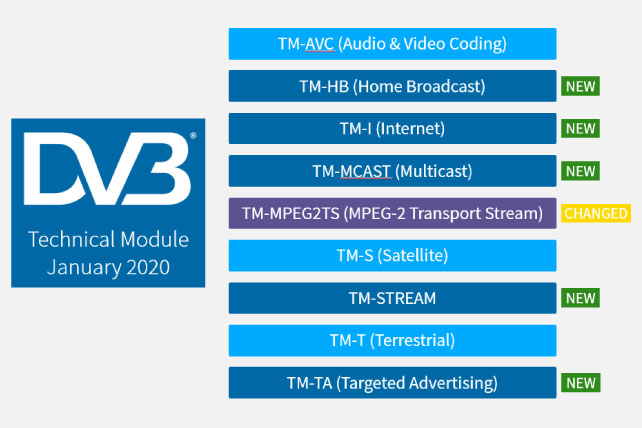 Last week’s meeting of the DVB Technical Module approved a significant reorganization of its sub-groups, responsible for the development and maintenance of DVB’s specifications. Five new groups were created and another was renamed to reflect a change of scope.

Representatives of DVB Members can follow and contribute to the work of the new groups by joining them on our new members’ portal at member.dvb.org.

While the TM-IPI group had originally been created to develop DVB’s IPTV specifications, in recent years it took on most work items related to the use of IP in DVB specifications. The result was a proliferation of task forces that have now been elevated to be working groups in their own right. The TM-IPI group is now in sleep mode – it will be reactivated if any maintenance of the DVB-IPTV specifications is needed.

The new sub-groups of the Technical Module are as follows:

In addition to the creation of these five new groups, the long-standing TM-GBS (Generic Broadcast Services) group has been renamed as TM-MPEG2TS (MPEG-2 Transport Stream). Its chair Alexander Adolf is stepping down – candidates interested in replacing him should contact Jon Piesing.

The other Technical Module sub-groups that remain active are: TM-AVC (Audio and Video Coding), TM-S (Satellite) and TM-T (Terrestrial).