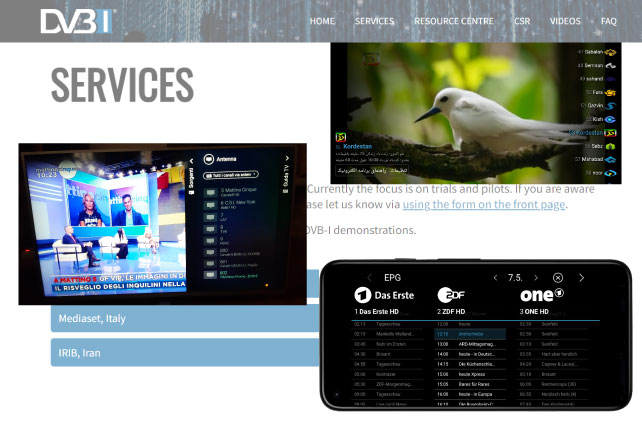 Information on tests in Germany, Italy and Iran added to DVB-I website

A website that provides useful information and resources for potential DVB-I implementers, launched last August, has been updated with a new section on services. With an initial focus on trials and pilots, it includes details on the completed DVB-I pilot in Iran, an ongoing one in Germany, and a proof of concept in Italy.

DVB-I offers a standards-based solution for delivering television – live, linear and on-demand – in the internet age. Working with all delivery platforms and device types, DVB-I unifies broadband and broadcast delivery and can adapt to the needs of individual markets.

The world’s first DVB-I pilot was launched in March 2020 by the R&D team at IRIB (Islamic Republic of Iran Broadcasting), making use of the official DVB-I reference application. Previously covered in an article for DVB Scene (Issue 56, September 2020), the pilot provided valuable early implementation information both for IRIB and for others interested in implementing DVB-I

Also detailed on the DVB-I website, the ARD Play-Out-Center in Berlin, in conjunction with the ARD broadcaster for the region, rbb, is running a DVB-I pilot for the benefit of all ARD broadcasters and ZDF.

The pilot kicked off in September 2020 and will continue indefinitely. The main service list currently includes 23 television services and six radio services (a number that will increase considerably in future). Delivery of the services is via both classical DVB broadcast and DVB-DASH streaming.

Mediaset is leading a proof of concept (PoC) for DVB-I in Italy, in collaboration with several partners. While DVB-I has already been identified as a potentially important future solution for unifying access to services delivered over both broadcast and broadband, its adoption in Italy will depend upon several verifiable conditions being met.

One of the conditions of an eventual adoption of DVB-I Italy is the successful completion of end-to-end trials by the major Italian broadcasters. It is in this context that Mediaset began planning the PoC in 2019. It has been in its second phase this year and will continue into 2022.

The Services page on the DVB-I website will be kept updated as the above trials evolve and as new ones are launched. Anyone with information about a trial or other service launch that is not featured is invited to contact the DVB Project Office (dvb@dvb.org).