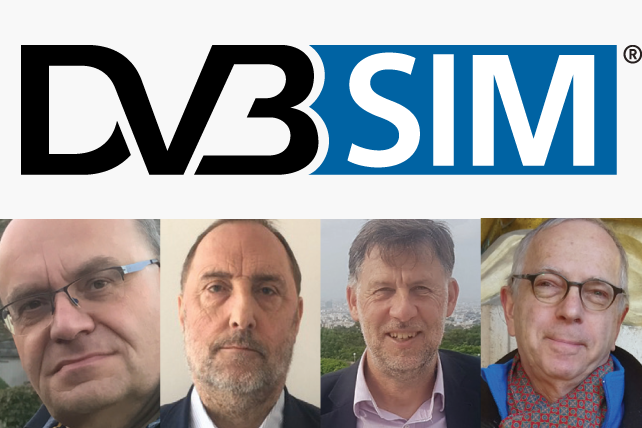 An oral history of the birth of DVB SimulCrypt

In January 2021, we learned that DVB’s work on common encryption was to be recognized with a Technology & Engineering Emmy® Award. To mark this honour, we invited some of those who were involved in the commercial and technical work that led to SimulCrypt to share their memories of that time.

This article was first published in Issue 57 of DVB Scene magazine.

Robin Crossley worked for SES Astra between 1986 and 1989 and again between 1991 and 1995. From 1995 he worked for Sky until his retirement in December 2020.
David Cutts, now retired, worked with several companies in the pay-TV sector, including BSB in the UK and France Télécom, before forming S&T (with Nick Birch).
Andrew Glasspool began his career in the television industry with BSB, after which he founded Farncombe Technology. He still works as a consultant on a wide variety of digital television and telecoms projects, when not sailing around the world.
Erik Lambert joined the Canal+ group in 1986 and partook in the DVB Project’s work as a representative of Canal+ until 2002. Lately he has helped launch two SVOD platforms, HBO Nordic and StarzPlay Arabia.
(Pictured left to right above)

Andrew Glasspool: SimulCrypt, just a word, with a simple definition, meant so many different things to the different players in the industry. And ironically it delivered something that went far beyond its original scope. The technical working groups brought together experts from each of the conditional access (CA) system vendors in a way that had never happened before. At times these experts, having worked in isolation for much of their careers, were surprised to find that their solution for messaging and interfacing was not the only way and perhaps not even the best way. This created interesting dialogue and challenges for the specification, given than none of the systems had been designed to interoperate at a DVB headend.

Erik Lambert: The idea of SimulCrypt was born in the analogue era. At the end of the 1980s, Canal+ was in discussions with France Télécom about using D2-MAC transmissions (an analogue standard with some limited data capacity) to feed both the DTH and cable markets. A standardized CA system was being developed – Eurocrypt – but Canal+ quickly identified two major issues. The first was linked to the change of CA in case of a major system breach (this was quite a frequent occurrence) with the necessity to temporarily associate two systems to the same scrambled signal; the second to the necessity to isolate the DTH network from the cable one, due to differences in the commercial policies.

Thus was born the idea of a common scrambled signal and a common signal architecture, associated with several CA systems, that is, SimulCrypt!

During the first years of the 90s it became clear (at least to the technically savvy) that the future of broadcasting would be digital. The European Launching Group (precursor to the DVB Project) was created, and the European pay-TV operators, who had toyed with the idea of each controlling their own digital transmission system, joined the common standardization effort in 1993.

David Cutts: Critical to making the DVB system as close to standardized as possible was the requirement for a means, analogous with the ‘cut and rotate’ scrambler of MAC, that would scramble the video and audio transmission in the broadcast so that individual users can descramble at the receiver. This requirement was met by the common scrambling system, a core part of the problem.

Another key part of the DVB activity was in defining the architecture, its standardization and regulation such that it could support at the same time both a high-volume implementation of the underlying silicon hardware and customized and secure implementations of the security mechanisms required to deliver descrambling keys to individual customers.

DVB set up a specialized policy/ commercial group, reporting to the Steering Board and chaired by Eamon Lalor, from the European Commission, that set out to give structure and resolution to these issues. At the heart of the whole solution is the common scrambling algorithm (CSA). The DVB Members involved put together a specialist team of cryptographers of global stature to work out how to provide this function.

Erik: Scrambling and CA became a contentious topic, and immediately positions (and camps) mimicked the earlier French debate of a single system vs. multiple coexisting systems. Under the constant push of Eamon “how to eat an elephant, one spoonful at a time” Lalor, the concept of SimulCrypt was, after a while, accepted by all parties.

Robin Crossley: The challenge for this work, of course, was that there were very strongly held views about the need to use proprietary technology (secret, with lots of IPR) versus ‘open’ technology (not secret and not so much IPR). One testing question someone once asked was “ask yourself who’s going to pay to fix it when it gets hacked?”

Most of my memories relate to the workings of the sub-sub-group that was tasked with inventing a common scrambling algorithm, needed if SimulCrypt was going to work. Because of the nature of this work, it was a restricted group; in fact, Frits Schreuder (SES) and I were the only two who weren’t ‘super mathematicians’! Each of the main protagonists of encryption nominated their own expert: Dr Amos Fiat for Canal+, Professor Adi Shamir for NDS (now Synamedia), Louis Guillou for CCETT/France Télécom, and Donald Davies for Irdeto.

Erik: Difficult discussions with the European security administrations introduced extra constraints on the system: it was to be highly asymmetric – the encryption equipment difficult to implement and under severe export control, so as to allow for the free circulation of the decryption chips.

Furthermore, the administrations were not happy with the real entropy of the system (the resistance to brute force attacks) so there was to be a CSA1 and a CSA2, with an over-the-air upgrade, to allow for the base requirement of life-length for the system: the upgrade was done very soon after the commercial launch of digital pay-TV in 1995–96.

Robin: These people were all top ‘algorithimists’ and spent much of their time trying to outscore their peers on intellectual prowess! There were more than a few tense moments and tantrums and even walking-out-of-the-room episodes. A particular memory I recall is Adi Shamir saying to Amos Fiat “did you not listen when I taught you this stuff in university?” These two are famous for the Fiat Shamir ‘zero knowledge’ authentication algorithm.

There were some interesting ‘cold war’ stories discussed over dinner, as most of these guys had connections with or were directly employed by government intelligence agencies.

I particularly remember Donald Davies telling us of attempts by the US secret service to activate a passive microphone in a Russian embassy building across the river. They apparently beamed so much microwave energy at it that the window glass got hot!

David: SimulCrypt, strictly defined as allowing different CA systems to control a single TV transmission, has been rarely used, in each case in the process of switching from one CA smart card system to another. But the work done to define how a headend supports SimulCrypt and common scrambling has been used throughout the industry.

Andrew: That a solution was found that accommodated every “security” quirk of every system, yet could be implemented by any multiplexer manufacturer, is a great tribute to the skills of the people that came together in the SimulCrypt group. Today the output of this group goes far beyond just enabling two CA systems to work together. The standard that was created is implemented in every DVB headend, allowing manufacturers since the mid-1990s to make equipment without concern for the CA system or systems that might be used. SimulCrypt has therefore become one of the longest lasting, important but little- known standards created by the DVB Project.

Erik: Today, the basic concept of SimulCrypt with a common scrambling applied to the audiovisual content signal and several access management systems associated with this scrambled signal, is also the standard mode of operation for OTT services. From analogue broadcast to the internet, the long life of a simple idea!

David: What we managed to achieve, between us – companies often strongly competing in the market for viewers, content and technology-platform share – was to pull together the different threads into technical, commercial and regulatory consensus that enabled the industry to grow based on what we all wrote down. This was enshrined in EU regulation, thus enabling a high-volume base to be built for digital television in Europe and across the planet.