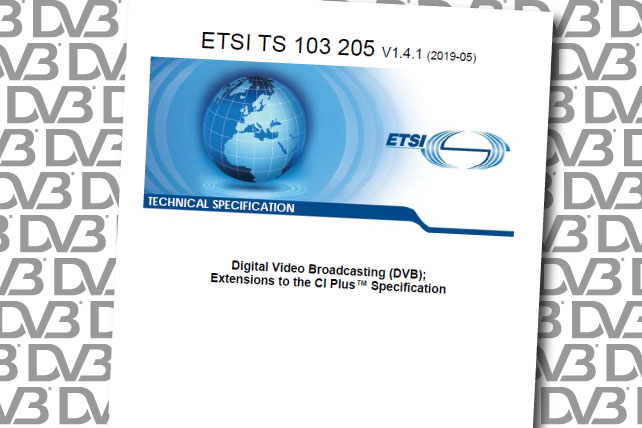 Update to CI Plus extensions published by ETSI

ETSI has published TS 103 205 V1.4.1, DVB Extensions to the CI Plus Specification. The most significant change is the addition of a new overt watermarking feature.

A key enabler for pay-TV services around the world, the DVB Common Interface (CI) specifications describe a system whereby a removable Conditional Access Module (CAM), given the appropriate rights, unscrambles protected content and routes it back to the host over the same interface. These were subsequently extended by CI Plus LLP to provide common methods for mutual authentication of the CICAM and host, and link encryption over the return interface from the CICAM to the host. The aim was to enable a horizontal market for trusted CI Plus hosts and modules which can receive pay-TV services.

DVB has, since 2014, published extensions to CI Plus V1.3, which was produced and continues to be published by CI Plus LLP. The overt watermarking feature that has been added to the latest version is an optional feature that provides a secure protocol to display a line of text over video from a scrambled service. Its main purpose would be to display subscriber identity over the video. The solution is supported for both broadcast and IP-delivered content.