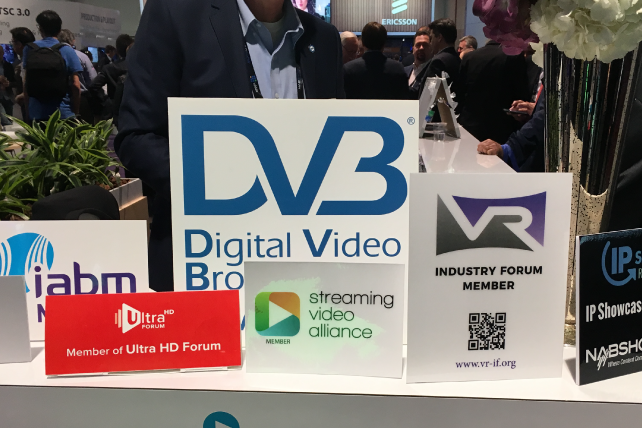 A visit to the NAB exhibition and conference in Las Vegas provides opportunities both to meet with DVB Members and to look out to the wider broadcast technology world. UHD continues to dominate conversation, along with IP and remote production. For UHD, there is plenty of industry interest in when, and in what form, it is likely to take off. For now, however, progress has been slow.

North America is, of course, ATSC territory, so there was lots of noise around ATSC 3.0. At a session organised by the IEEE’s Broadcast Technology Society I heard that, with the exception of the 4K service already launched in South Korea, real commercial deployments of the standard are still a couple of years away.

At Saturday’s Global UHD Conference we learned that HDR (high dynamic range) has been slow to take off. Harmonic’s Thierry Fautier noted that there are only eight HDR services actually on air globally, while Mike Fidler of the UHD Alliance said that the number of HDR-capable devices remains low when compared to 4k displays. He remarked that a confusing HDR landscape may be delaying consumer buying decisions.

One has access to a wealth of data and insights via the conference sessions, but there were a few points that particularly resonated for me. At the Devoncroft Executive Summit I noted that OTT and multi-platform delivery is seen as having the highest commercial importance for end-user business over the next 2-3 years. At the annual Future of Broadcast TV meeting, our Japanese colleagues set out their long-term R&D priorities for 2020 to 2040! One of the highlights was glassless 3DTV, which could mean holographic projection. Other important topics are smart production using big data analysis, speech recognition and image analysis to aid editing.

There were more than 40 DVB Members exhibiting at the NAB Show this year. The delivery of their membership plates took me on an enjoyable and informative tour of the show floor and gave me an opportunity to have many useful catch-up conversations. (I did note, as you can see in the photo, that perhaps there’s a need for standardisation in the size of membership signage!)

I saw DVB technology in action in several demos and received numerous offers of support for upcoming DVB workshops along with demo proposals for our IBC booth. (Our PCM will discuss the options next month.) I was heartened by conversations with C-level executives who expressed their continued strong support for DVB and the importance of the standards that result from our work.

The NAB Show seemed a little quieter than in previous years, something that others I spoke to also remarked. Otherwise it was business as usual, with no particular highlights but plenty to keep a delegate busy!