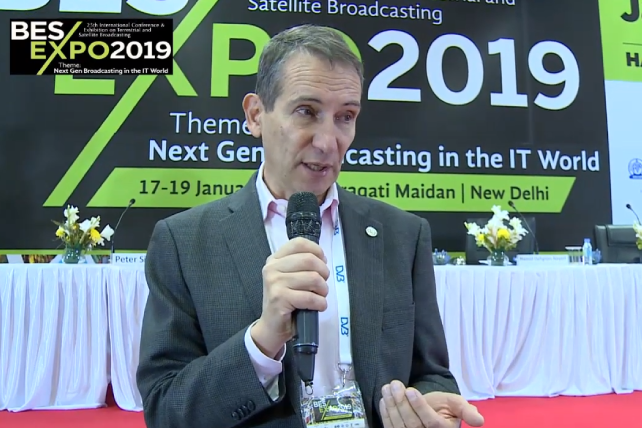 Targeted Advertising and Next Gen broadcast in focus at BES

The DVB Project was represented by its Head of Technology Peter Siebert at last week’s BES conference in New Delhi, India. He was invited to address two key topics for the event: Targeted Advertising and Next Generation Digital Broadcasting.

The event is organized by the Broadcast Engineering Society, which brings together broadcast engineers in India. The theme for this year’s event was “Next Gen Broadcasting in the IT World”. Alongside the conference there was an exhibition featuring local and foreign manufacturers.

In his presentation on Targeted Advertising (TA), Peter Siebert presented ongoing activities in DVB, where technical work is  progressing. His presentation also covered the commercial relevance of TA for broadcasters and specifically the necessity of a horizontal standardized solution for public broadcasters. Other speakers in the session included Yan Mostovoy (Harmonic), who spoke about DVB-T2 monetization through regional and targeted ad insertion, and Eric Deniau (Enensys), who spoke about server-side insertion of targeted advertising.

In a further presentation, during the session on future digital broadcasting systems, Peter Siebert outlined the likely features and functionalities of a next generation system. He discussed the importance of integration with mobile, hybrid broadcast/broadband interactivity, and integration with IP and OTT, where the DVB-I initiative will be a key contributor. He stressed the need for cooperation, both with 3GPP, the body responsible for the 5G specifications, and DVB’s counterparts in broadcast standards, namely ATSC, ARIB and DTMB.