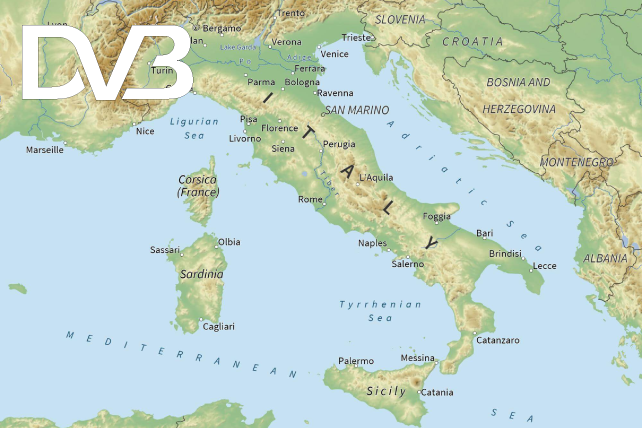 The Italian Ministry of Economic Development (MISE) has indicated that citizens will soon be able to avail of a subsidy to upgrade to DVB-T2 receivers. Those who qualify for the subsidy, by being in the two lowest economic bands, can obtain a €50 discount on the price of a TV set or set-top box compatible with DVB-T2 and both MPEG-4 and HEVC.

The total budget for the initiative is €151 million. It will begin operation as of November 2019, subject to confirmation following a 30-day consultation period. The discount on the chosen device will be applied directly by the retailer on the VAT-inclusive price. The subsidies will be available until the end of 2022 or until the amount allocated is exhausted.

Digital terrestrial television is the primary distribution platform in Italy. According to Digital TV Research, total penetration in 2017 was 84%, with primary penetration at 67%. DVB-T services were launched in 2003 and viewers can receive more than 40 national programmes and 200 local or regional programmes. There are 21 multiplexes in Italy.

Given the scale and complexity of the terrestrial market in Italy, it is perhaps unsurprising that the transition to DVB-T2 has not been smooth.

An initial roadmap approved last autumn, which called for abandoning MPEG-2 video coding as of 2020, has now been cancelled. A new roadmap is expected to be published in the coming weeks. The approval of the new subsidy provides a clear indication that the country has committed to moving to DVB-T2 and an advanced video codec, with one likely goal being to minimize the period of simulcasting that will be required so the frequencies can be cleared sooner.

Italy is just one of several European early adopters of DVB-T that are now transitioning or have transitioned to the more efficient second generation system.

DVB Members can access a detailed database on global DTT implementation on the DVB Worldwide page.