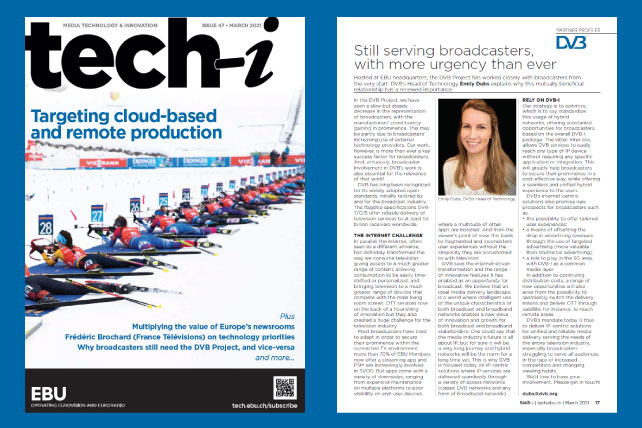 Still serving broadcasters, with more urgency than ever

This article by DVB Head of Technology Emily Dubs was originally published as a Partner Profile in the March 2021 edition of EBU tech-i magazine.

In the DVB Project, we have seen a slow but steady decrease in the representation of broadcasters, with the manufacturers’ constituency gaining in prominence. This may be partly due to broadcasters’ increasing use of external technology providers. Our work, however, is more than ever a key success factor for broadcasters. And, virtuously, broadcaster involvement in DVB’s work is also essential for the relevance of that work!

DVB has long been recognized for its widely adopted open standards, initially tailored by and for the broadcast industry. The flagship specifications DVB- T/C/S offer reliable delivery of television services to at least 1.5 billion receivers worldwide.

In parallel, the internet, often seen as a different universe, has definitely transformed the way we consume television: giving access to a much greater range of content, allowing consumption to be easily time- shifted or personalized, and bringing television to a much greater range of devices that compete with the main living-room screen. OTT services rose on the back of a flourishing of innovation but they also created a huge challenge for the television industry.

Most broadcasters have tried to adapt in order to secure their prominence within the connected TV environment: more than 70% of EBU Members now offer a streaming app and PSM are increasingly involved in SVOD. But apps come with a variety of downsides, ranging from expensive maintenance on multiple platforms to poor visibility on end-user devices where a multitude of other apps are installed. And from the viewer’s point of view this leads to fragmented and inconsistent user experiences without the simplicity they are accustomed to with television.

DVB sees the internet-driven transformation and the range of innovative features it has enabled as an opportunity for broadcast. We believe that an ideal media delivery landscape is a world where intelligent use of the unique characteristics of both broadcast and broadband networks enables a new wave of innovation and growth for both broadcast and broadband stakeholders. One could say that the media industry’s future is all about IP, but for sure it will be a very long journey and hybrid networks will be the norm for a long time yet. This is why DVB is focused today on IP-centric solutions where IP services are delivered seamlessly through a variety of access networks (classic DVB networks and any form of broadband network).

Our strategy is to optimize, which is to say standardize, this usage of hybrid networks, offering substantial opportunities for broadcasters, based on the overall DVB-I package. The latter, inter alia, allows DVB services to easily reach any type of IP device without requiring any specific application or integration. This will greatly help broadcasters to secure their prominence in a cost-effective way, while offering a seamless and unified hybrid experience to the users.

In addition to optimizing distribution costs, a range of new opportunities will also arise from the possibility to seamlessly switch the delivery means and deliver OTT through satellite, for instance, to reach remote areas.

DVB’s mandate today is thus to deliver IP-centric solutions for unified and reliable media delivery serving the needs of the entire television industry, especially broadcasters struggling to serve all audiences in the face of increased competition and changing viewing habits.