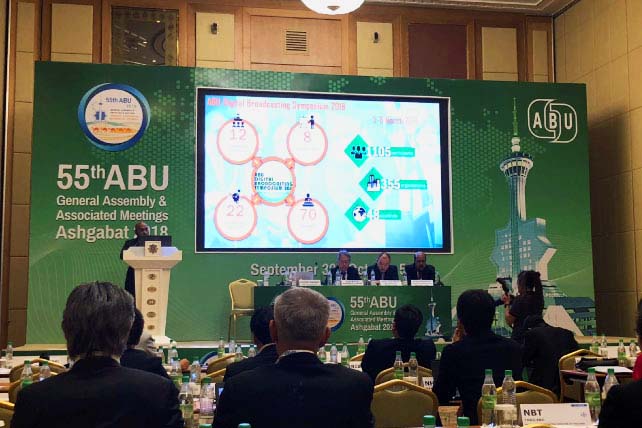 The General and Technical Assemblies of the Asia-Pacific Broadcasting Union (ABU) took place in Ashgabat, Turkmenistan last week. DVB, as an affiliate member of the ABU, contributed to the Technical Assembly through the participation of Peter Siebert, Head of Technology.

One of the key decisions taken was the approval of a World Broadcasting Unions (WBU) recommendation on safeguarding C-band spectrum. The recommendation calls on satellite service providers and government regulators to protect the availability of the upper part of the C-band spectrum, where the band has been allocated to satellite services and is used to provide broadcasting services.

The decision to approve the WBU recommendation took into account the fact that there are at least 100 million C-band television receive antennas worldwide. C-band is critical for satellite services in tropical regions as it suffers less from the attenuation effects of heavy rainfall than the Ku and Ka bands. It is one of the frequency bands that the mobile industry and regulatory bodies consider as having potential for use by 5G networks.

Another important topic on this year’s agenda was cybersecurity. Here too the ABU aligned itself with the WBU in urging its members to regularly review and evaluate the security systems and protocols in place to be better prepared for potential attacks and threats.

DVB’s Peter Siebert delivered a presentation on 5G and broadcast. He explained the current status of 5G broadcast standardization in 3GPP, noting that the earliest a 5G terrestrial broadcast specification could be expected was the end of 2020. This meant that compliant equipment could not be expected before 2023. He also covered the latest update of eMBMS which, with major contributions from the EBU and European broadcasters, made mobile broadband more broadcast-friendly.

The chairman of the ABU Technical Bureau, Mazakazu Iwaki (NHK, Japan), stepped down as his term of office had come to an end. The assembly elected Hamid D Nayeri (IRIB, Iran) as the new chairman.

The ABU is a non-profit, non-government, professional association of broadcasting organizations to facilitate the development of broadcasting in the Asia-Pacific region and to organize cooperative activities among its members. Next year’s Technical and General Assemblies will take place in Tokyo, in November 2019.