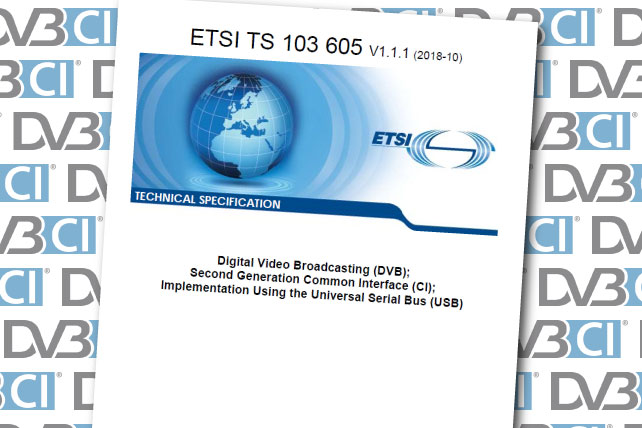 ETSI has published TS 103 605 V1.1.1, the second generation DVB Common Interface specification. DVB-CI enables a removable Conditional Access module (CAM), given the appropriate rights, to unscramble protected content and route it back to the host device over the same interface. While the first generation relied on a PC Card slot, the new standard uses USB.

The new publication represents a major update to the Common Interface – the first DVB-CI standard was published in 1997. Moving to the USB form factor will breathe new life into CAM technology. It embraces a modern and ubiquitous interface that is commonplace on TV devices.

While the use of DVB-CI-Plus is widespread in Europe, the costs associated with adding a PC Card slot mean that its implementation in the rest of the world has been limited. Since virtually all new TV sets support USB, the cost implications of implementing DVB-CI-Plus in future will relate mostly to software integration.

The original DVB-CI specification was complemented by the CI Plus™ specification, originally developed by CI Plus LLP, which adds additional security features (encryption over the module to host interface) to meet the needs of the industry. DVB has further developed the DVB-CI-Plus specification since 2011. CI Plus LLP has welcomed the move to a USB form factor and sees it as a natural evolution of CI Plus.