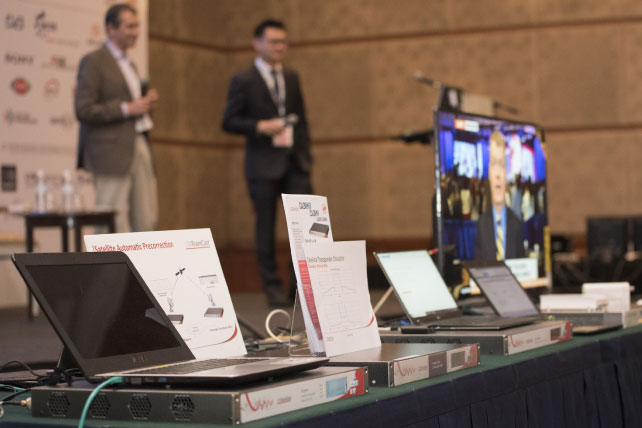 DVB recently hosted a workshop in Kuala Lumpur on advanced features and applications of DVB-S2/S2X. It was part of the Asia-Pacific Broadcasting Union’s annual Digital Broadcasting Symposium. The workshop and its accompanying hands-on demonstrations were warmly received by the more than 120 delegates in attendance.

With contributions from several DVB Members and the support of the ABU, the workshop was a valuable addition to the programme of the Digital Broadcasting Symposium. Satellite is a popular means of transmission in the region and virtually all television services use DVB-S/S2/S2X.

The workshop, moderated by DVB’s Peter Siebert, opened with an update from Ken Loke (Eutelsat Asia) on IP delivery and interactivity based on HbbTV for satellite. This was followed by at talk on the features of the latest DVB-S2X specification from Chuan Soin Tong (Newtec). His presentation was accompanied by a demonstration of four UHD signals being transmitted with an overall data rate of 100 Mbit/s, using the S2X channel bonding feature. The signal was spread over three transponders. In the receiver, a Broadcom chipset combined the three signals into the original 100 Mbit/s stream.