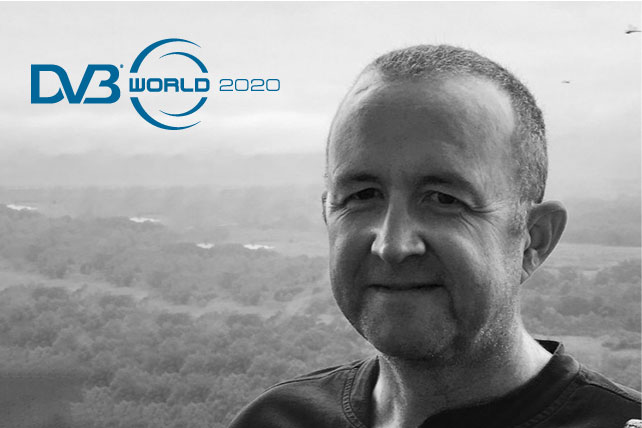 The keynote address at DVB World 2020 will come from InterDigital’s Alan Carlton, a longtime leader in wireless standards development. He will make the case that, despite the hype, 5G as currently designed will not be sufficient to meet the video-related demands that will be placed on it.

5G is much on the minds of broadcasters and others in the content delivery space, whether gaming companies or business communications providers – it was on the agenda at DVB World 2019 and features once again this year. In a talk titled Completing the marriage between video and wireless – why 5G is not enough, Mr Carlton will argue that 5G, in its first iteration as currently defined, is not enough to deliver on its promise when it comes to video delivery.

Aligning the video processing roadmap with the wireless standards roadmap, he will show that 5G’s current capabilities did not plan for the demands being placed on it, and new demands – 8K video, 360 video, immersive video – will stretch it beyond its breaking point. He will examine the wireless roadmap that stretches beyond 5G (literally, B5G) and how wireless will evolve to meet these capabilities… even if 6G is required to do it. The talk, which opens DVB World 2020 on Monday 9 March, will unapologetically expose the limits of today’s most hyped technology, and offer a way forward that meets the needs of the broadcast industry and others.

Alan Carlton leads the InterDigital Europe R&D effort out of London. One of InterDigital Europe’s focus areas has been participation in several European collaboration projects (with partners like Belgian broadcaster VRT and Disney) around unicast and multicast, and re-architecting networks for future video needs. Their work has won multiple awards, including special mention at IBC in the 5G category, and Alan is a four-time speaker at Mobile World Congress.

Later in the conference, on Wednesday morning, a session titled “5G: all aboard?” will include presentations on how DVB’s work is taking account of the new technology, OTT solutions based on a combination of 5G and satellite, and an analysis of the business case for 5G broadcast.

Other sessions in Valencia will consider the evolution of broadcast platforms, technologies for streamed media delivery, and the development of UHD codecs and standards. DVB-I will also be a key focus, including in presentations, a panel discussion and an optional pre-conference masterclass.

While the Managing Director of StarTimes Group had originally been announced as the keynote speaker for DVB World 2020, travel restrictions at the Chinese company led to Xun Gu reluctantly withdrawing from the event. DVB is delighted to be able to replace him with a speaker of the calibre of Alan Carlton. We hope to welcome StarTimes Group to a future edition of DVB World.