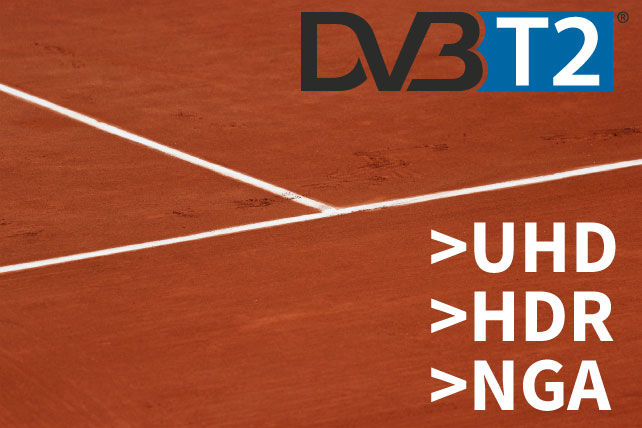 DVB’s vision for the future of media delivery sees broadband and broadcast networks being used intelligently to ensure audiences are efficiently served with high quality content. The emergence of DVB-I is accelerating the shift to an internet-centric model, but broadcast platforms also continue to evolve, taking advantage of new codecs and techniques.

Trial broadcasts in Poland, France and Spain point towards a bright future for DVB-T2 services as part of the overall media delivery mix. All three services are based not only on DVB’s popular second generation terrestrial system, but also follow the core DVB specification on audio and video coding that sets out the codecs to be used for UHD services.

Poland is one of several European countries working towards migrating from well-established DVB-T networks to DVB-T2. The trial broadcast that has recently begun in the Krakow and Katowice areas uses HEVC video coding to deliver the TVP Kultura HD, TVP Polonia HD and TVP Entertainment programmes. Since December 2019, all new TV sets sold in Poland are required to support DVB-T2 and HEVC.

This trial is notable for being the first 24/7 DVB-T2 broadcast channel using a next generation audio codec (AC-4), on the TVP Kultura HD service. The trial is being run by Telewizja Polska and Emitel, who plan to expand the coverage to several other areas in the coming months.

The recent 2020 edition of the French Open tennis tournament was broadcast on France tv sport 4K UHD, a special channel that was on air for the duration of the event. The DVB-T2 service was available to viewers in Paris, Nantes and Toulouse (and nationwide via the FRANSAT DVB-S2 bouquet).

Frédéric Brochard, director of technologies at France Télévisions said that “offering a UHD channel for major sporting events, as we do at Roland-Garros, is part of the commitments made by Delphine Ernotte [CEO of France TV] before the CSA to propose, as soon as possible, a precursor offer in Ultra High Definition on DTT.”

The service used HEVC video coding with high dynamic range (HDR), along with AC-4 next generation audio. France plans to launch a permanent terrestrial UHD network to coincide with the 2024 Paris Olympics.

Spanish broadcaster RTVE recently carried out the world’s first ever DVB-T2 broadcast of 8K content. Using HEVC video coding and AC-4 audio, the signal was broadcast from the television headend of the Polytechnic University of Madrid (UPM). The bit rate for the audiovisual content was around 32 Mbit/s.

The broadcast used UHF channel 44, which had been temporarily assigned to the RTVE Chair at the UPM, a centre of excellence for UHD technology development established in 2015. The transmission was also made available in several other Spanish cities as it was carried on the TVE 4K terrestrial channel, operated by Cellnex Telecom.

Read more about UHD over DVB-T2 on pages 12–13 of the latest edition of DVB Scene magazine.