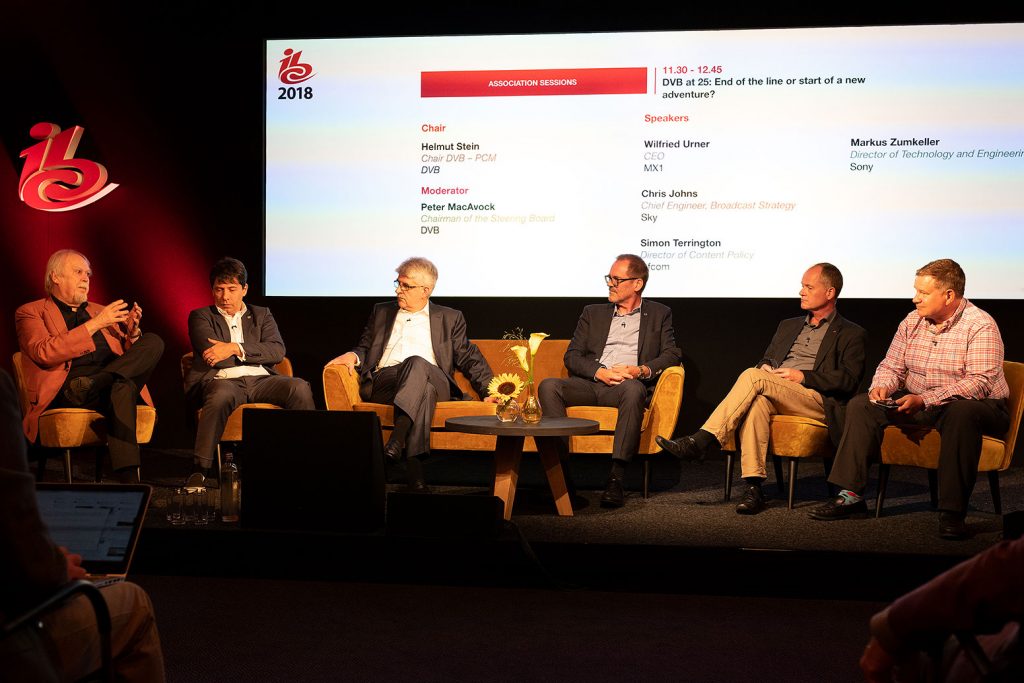 New adventures ahead for DVB

“DVB,” said MX1 CEO Wilfried Urner, “prepared the ground for all that is done today and most probably in the future.” He was the keynote speaker for today’s special conference session at IBC2018 marking DVB’s 25th anniversary. He recalled his involvement in some of the very first services to use DVB standards in the mid-90s and pointed out how important it had been that DVB emerged as a group that worked across the complete value chain.

The session was chaired by Helmut Stein, who was performing his last formal act as chair of the DVB Promotion and Communications Module. Involved in DVB from the very beginning, he described it as “an organization created quite differently from anything else that existed at that time.”

The keynote was followed by a free-flowing panel discussion moderated by DVB’s chair Peter MacAvock. All four panellists agreed that DVB can and should continue to play a role in the development of standards to enable innovative new services. Chris Johns of Sky pointed out that membership of DVB played an important part in being able to push the boundaries, but he said that the organization would have to accelerate its processes to keep up with the pace of digital.

Simon Terrington of Ofcom noted that 71% of audiovisual viewing was still over DVB platforms. He said that hybrid platforms would be the most important going forward and that the challenge for DVB would be bringing the right people together to ensure a fully integrated consumer experience.

“The next living room is the car”

For Sony’s Markus Zumkeller, the place where DVB should be looking to make an impact was in the delivery of audiovisual content to cars. He said that the arrival of autonomous driving “will give us one hour per person per day which can be filled up with entertainment, with AV, with what we’re providing via DVB.” Helmut Stein picked up on this point by connecting it to the wider topic of the Internet of Things which, he said, will require broad reliable data pipes. “DVB is wireless, high data rate, low failure rate, so DVB already has some of the building blocks.”

The panellists were asked whether they felt DVB’s structure was still fit for purpose. Wilfried Urner stressed the importance of getting younger people involved in the organization: “Let’s talk with them and try to understand how we get them on board to work with open standards.” Chris Johns agreed, referring to the growing desire among younger generations to interact with the metadata that lies behind the content they consume. He said that DVB has a strong need for people with fresh ideas.