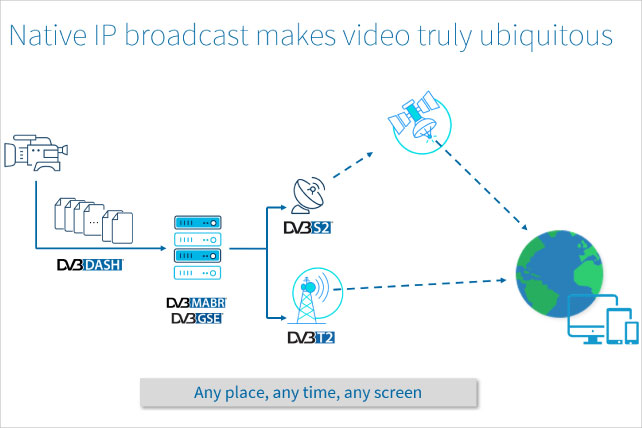 Following an introduction from DVB’s Head of Technology Emily Dubs, Thomas Wrede (who chairs the DVB CM-S group on behalf of SES) explained the context for the work: broadcast, whether satellite or terrestrial, has reach and signal availability that broadband does not have. On the other hand, the MPEG Transport Stream that is typically used for broadcast video delivery is not tailored for IP devices. Hence the requirement for an IP-based solution for delivery over broadcast networks.

The use cases for DVB Native IP, which form the basis of the ongoing technical work, were set out by both Thomas Wrede, who covered B2B use cases, and Richard Lhermitte (ENENSYS Technologies), who explained some of the possible B2C applications.

Jean-Claude Sachot (Broadpeak) then presented some B2B examples that have already been launched in the market, notably by the Malaysian pay-TV provider Astro. The deployments described are based on proprietary systems, awaiting the completion of the necessary standards.

“Broadcast coverage expands reach and drives OTT streaming costs down, as it provides an alternative route for delivering content,” said Sachot. He also affirmed that the solution in development, originally driven by the satellite community, can be easily transposed to terrestrial. He said that the hope is that DVB standardization will fuel market growth: “only standards have the power of lowering the barriers to entry for new technologies.”

The Native IP working group in DVB’s technical module is chaired by Tom Christophory (SES) and Régis Moulin (Eutelsat). A technical specification is anticipated by the end of 2021.

In addition to the video and slides, you can also find answers to the questions that were posted during the webinar – just visit our webinars section.