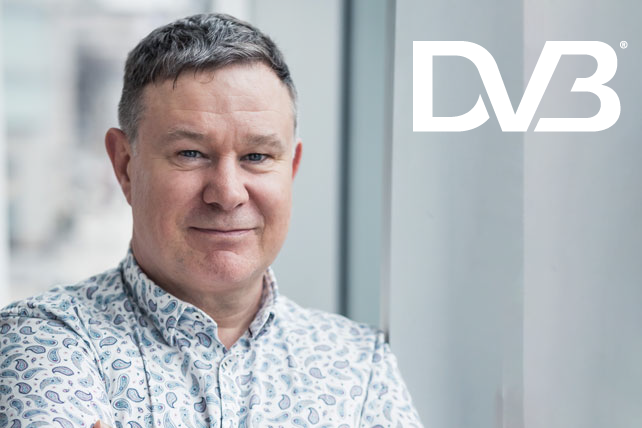 Over the last two years or so, DVB has shifted to promoting itself as internet-centric. But what does this mean? It’s about changing mindsets, shifting focus, revamping old working methods, and accompanying (encouraging? dragging?!) industry stakeholders into the future, all while retaining their support. My old adage is that “turkeys never vote for Christmas”: some of the changes being proposed are hard, and some are unpopular. But I believe they are necessary.

The DVB Project is uniquely placed to serve an industry that is changing faster than ever. Its heritage as the cornerstone of the analogue-to-digital and SD-to-HD transitions is useful, but in many ways constraining. In years gone by, DVB was on its own as the solutions provider in the digital broadcast space. While we believe in DVB’s credentials, there are a lot of organizations vying for relevance in the broadband media delivery space, each with its own unique proposition. What makes DVB different? Is it its focus on media? Its market-led, consensus- based approach? Its unique make-up of big media companies, big vendors and lots of technology providers? We cannot be certain, but it’s likely to be a combination of all of these.

We have been working on DVB’s new direction for some time. Many of the elements are already in place, like DVB-I, targeted advertising, DVB-DASH, DVB-MABR. The task now is to paint a clearer picture of how these elements – and others in the pipeline – fit together and can enable the next great transition, a transition that has already begun.

What, in practice, does an internet-centric approach entail? We have tried to instil a faster time-to-market and, critically, a greater focus on aids-to-interoperability. This latter element has meant that we don’t standardize our output until such time as the ‘verification and validation’ (V&V) phase of our work is complete. The thinking here is that if a specification is valuable, then its proponents will work to produce the tools necessary to help the market deploy interoperable solutions.

One of the challenges over the coming year will be to ensure that DVB is able to maintain its V&V effort, maximizing its usefulness and minimizing its administrative impact.

And have we really transitioned DVB into this new – more agile – organization? Well, honestly, no; not yet at least. The intention is there among those who care most about DVB itself, but transitioning the existing membership is sometimes a struggle.

Consensus is still very valuable, and we do have means of overcoming obstacles to consensus where they appear. We need to be quicker to apply them and we may even need to revisit the working methods as described in our tried and trusted Rules and Procedures.

Furthermore, many DVB-ers have been around for a long time, and attracting the new blood necessary to generate the exciting work items and to work in these new ways requires DVB to sell itself to a new audience, one that doesn’t care about heritage and reputation. With our new PCM Chair, Elfed Howells, now firmly in place with an innovative and ambitious agenda, we have an opportunity to revamp DVB’s public image. And, for the first time in a long time, we have the internet-centric ingredients to provide substance to the messages.