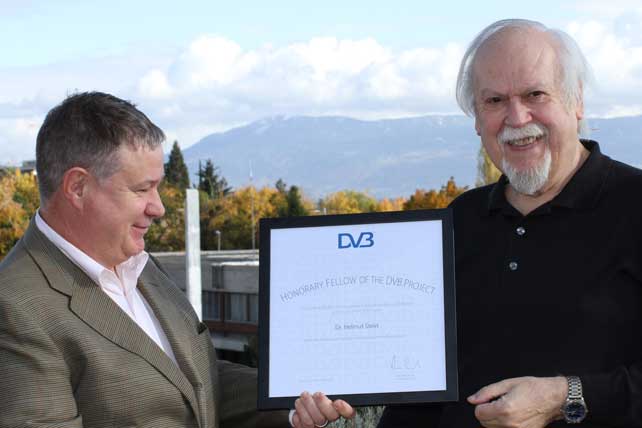 At last month’s meeting of the DVB General Assembly, Dr Helmut Stein became the eighth Honorary Fellow of the DVB Project. He had stepped down as long-standing chair of DVB’s Promotion & Communications Module in 2018.

DVB Honorary Fellowship aims to recognize, on their retirement from active participation in the DVB Project, significant individuals who have made sustained and substantial contributions to DVB over the years. It represents the highest honour that can be bestowed upon a participant in the work of the DVB Project.

Helmut Stein was one of the pioneers of digital television. Working for Nokia, he developed the first mass market DVB set-top box, in conjunction with pay-TV magnate Leo Kirch. The latter made industry headlines in 1998 when he ordered 1 million D-Boxes for the German market.

Since the outset of DVB, where Helmut was one of the founders, he has been a visionary in the media space. The Nokia Media Screen, which he developed in 1998, was well ahead of its time, as a battery-powered handheld device with WiFi, mobile telecommunications and a DVB-T receiver.

He chaired the DVB Promotions & Communications Module from the launch of the DVB Project until he stepped down last year. He also helped develop and launch MHP, and has provided valuable advice and resourcing to many DVB activities over the years.