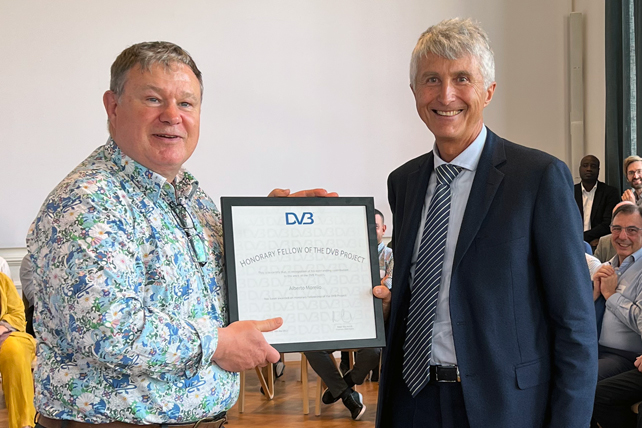 Alberto Morello, former director of the renowned research centre of the Italian broadcaster Rai, has been awarded Honorary Fellowship of the DVB Project. The presentation was made during last week’s DVB World 2022 event in Brussels.

Congratulating Dr Morello, DVB Chair Peter MacAvock described him as the “father of DVB-S2”, referring to his work leading the technical group that developed the highly successful second-generation specification for satellite broadcasting. Along with DVB-T2, in whose creation Alberto Morello was also a leading contributor, DVB-S2 was noteworthy for coming close to the Shannon limit, the theoretical best possible performance for transmission systems.

Accepting the award, Morello said that his work with DVB had been his favourite activity of his professional life. He retired in December 2019 following a career of more than 35 years.

“I’m proud that DVB-S and DVB-S2 have become the unique worldwide standards for television by satellite. And I’m proud that, since they were the first systems to have been developed for the physical layer, you can see the DNA of DVB-S in the whole family of DVB standards.”

In leading the development of DVB-S2, he followed in the footsteps of his Rai colleague Mario Cominetti, who had led the earlier work on DVB-S. With the TM-S group now chaired by Victoria Mignone of Rai, the strong links with the Italian research centre are maintained.

Honorary Fellowship of the DVB Project aims to recognize, on their retirement from active participation in the work of the organization, significant individuals who have made sustained and substantial contributions to DVB over the years. The award was created by the DVB Steering Board in 2006 and represents the highest honour that can be bestowed upon a participant in the work of the DVB Project.