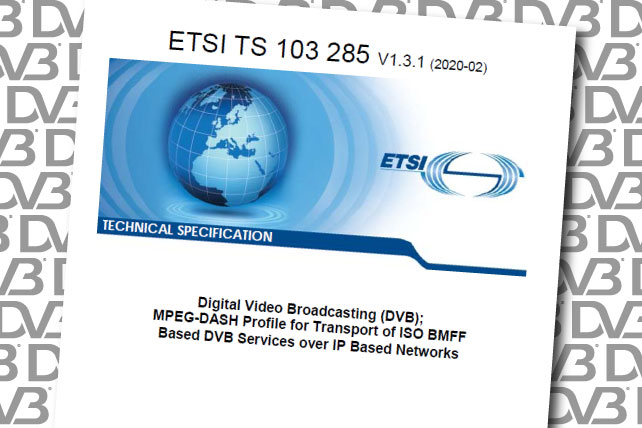 ETSI has published TS 103 285 V1.3.1, a new version of DVB’s MPEG-DASH profile for transport of ISO BMFF based DVB services over IP based networks. The main changes are the inclusion of a low latency mode and HDR dynamic mapping.

DVB-DASH builds on MPEG DASH, which was the first internationally-standardized adaptive bitrate HTTP-based streaming solution. To improve interoperability and facilitate implementation for television services, additional constraints and requirements are defined in DVB-DASH. The goal is to satisfy the core requirements for live and on-demand use cases. The resulting standard is a subset of MPEG DASH with a few extensions, along with a set of requirements for the DASH player in the client.

A special session focusing on media delivery using DASH will be presented at DVB World 2020 in collaboration with the DASH Industry Forum.

The new low latency mode in DVB-DASH breaks the streamed segments into smaller chunks, which are then delivered as soon as they are available at the encoder. So instead of outputting entire segments at one time, the encoder splits the segments into groups of frames – the chunks – where none of the frames in a group requires a frame from a later group to enable decoding. This approach cuts the end-to-end latency from 20–30s down to 3–4s.

The new version of DVB-DASH also includes solutions for HDR dynamic mapping, allowing the receiving device to adapt a high dynamic range video signal to the characteristics of the display. This provides content creators and device manufacturers with a means of adapting video content so that it replicates as closely as possible the intended appearance, as produced in a reference viewing environment.

DVB’s Service Information (DVB-SI) specification and its video and audio coding specification have also been revised to support HDR DM.

Find the latest versions of all DVB standards and BlueBooks in our Specification Library.