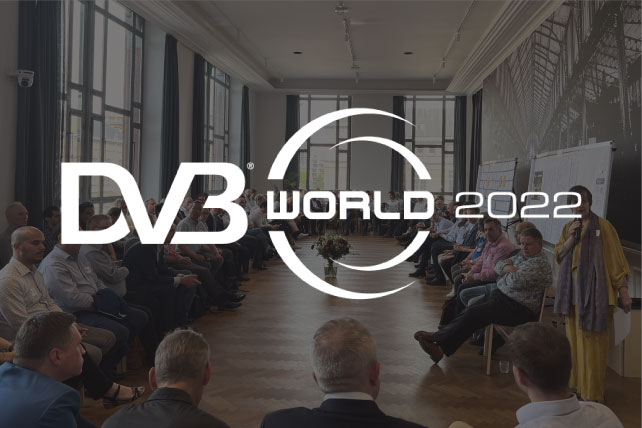 Around 120 participants gathered in Brussels this week for DVB World, returning for the first time since 2019. In a radical change to past editions, this year’s event was run as an unconference.

While it was the first unconference experience for the vast majority of the attendees and there were – understandably – doubts and even scepticism as to whether a conference with no speakers and no formal agenda could work, it quickly became apparent that this new approach was a success. Almost 30 sessions were pitched, with some being subsequently combined. (See the list below.)

Here’s a small selection of quotes from the post-event survey, where participants were asked what they most appreciated about the event:

“Very friendly and welcoming atmosphere, almost no direct sales pitches. Great format, inspiring.“
“Enthusiastic, smart people engaged in open discussion.“
“The unconference format worked very well. Every session I attended was relevant to my interests and I could have usefully attended many of the others.“
“The opportunity to network, listen and dream together.“
“An incredible venue and a well-organized and original event.“
“The best conference I have ever been to.“

Just over 20% of the attendees came from non-members of the DVB Project while about half were attending DVB World for the first time.

How did it work?

A social gathering on Tuesday evening gave the 80 or so participants who arrived the day before a welcome opportunity to ‘break the ice’ after the long absence of physical events. The following morning, in a just-about-big-enough room at the wonderful Maison de la Poste, the participants gathered in a circle (actually more of an oval!) as event facilitator Michaela Sieh explained how the day would work.

A blank agenda quickly filled up with sessions, as participants stepped up to pitch their idea and place it on the wall, selecting a room and time-slot. Technology demos had already been installed in some rooms to support the sessions that were pitched.

The rest of the day was a whirlwind of discussion, debate, interaction and energy, as people moved from room to room and session to session, with reports filed and posted progressively throughout the day. A closing circle provided an opportunity for an oral report on each session, before food and drinks were served to accompany further discussions – and even some singing – on into the night.

The unconference format meant that the agenda, which filled up even faster than the organizers had anticipated, matched closely the concerns and interests of the participants. Below is a complete list of the sessions that were pitched. The reports of these sessions have been circulated to all conference attendees.

DVB World will return in 2023, hoping to emulate the success of its first unconference. We hope to see you there!