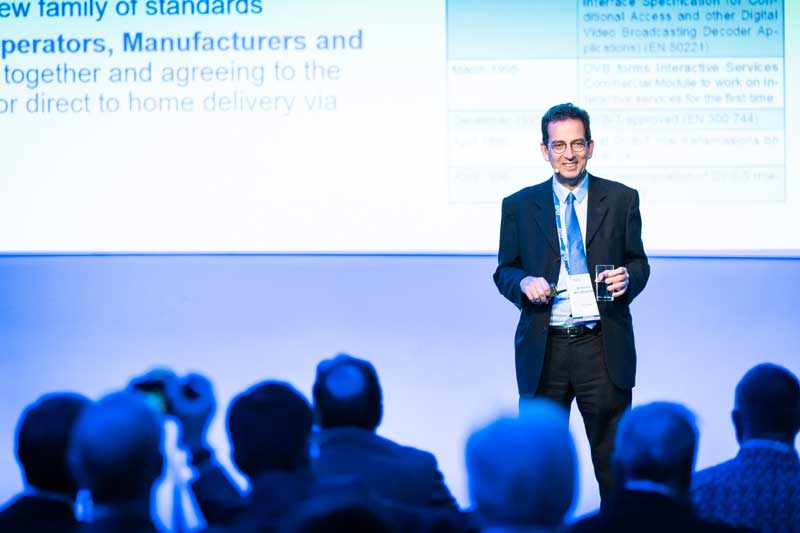 DVB World 2019 opened with a keynote speech from EBU Director of Technology & Innovation Antonio Arcidiacono. He called on broadcasters to work together through organizations like the DVB Project, which he said was a great example of public and private broadcasters working hand in hand, combining short and long-term investment to the advantage of the whole industry.

The conference is taking place at Dublin’s Croke Park this week (11-13 March), with more than 200 delegates from around Europe and beyond. Key topics on the programme include OTT and 5G. The event was preceded by a three-hour masterclass on the implementation of HbbTV, attended by 60 delegates on Monday morning.

Antonio Arcidiacono said that public broadcasters are strongly positioned to help set the reference for quality and innovation in the market. “They are not meant to look for a short term return on investment and they can naturally contribute to the continuous construction and evolution of the European media industry.”

He called on the European Commission and other public agencies to show tangible support for the efforts of both public and private broadcasters to guarantee a successful future. The contribution – he proposed at least 3% of Horizon development resources – should be proportional to the importance and weight of media in the daily life of European citizens.

DVB chairman Peter MacAvock provided insights into how the organization is changing to adapt to changes happening in the industry. He said that the shift to broadband television will prove to be as fundamental as the original shift to digital television was. Broadcasters, he said, are demanding solutions to simplify hybrid and broadband delivery, to “make it as easy as DVB broadcast”.

He set out several ways in which DVB is embracing the challenge. In addition to ongoing work on standards to support OTT and broadband delivery (DVB-I, Low Latency DASH, Multicast ABR), he said that DVB needed to redouble its efforts to ensure its standards were commercially focused. This meant ensuring that the users of the technology – notably broadcasters – should engage more with DVB’s Commercial Module.

Day 1 of DVB World also included a set of case studies from around the world, including the GAAGO OTT platform that brings Ireland’s national sports to fans around the world and a new DVB-based conditional access system designed to meet the specific needs of India’s vast cable market. There were also reports on the latest developments in media delivery in France, Switzerland and the UK and an overview of how South Africa-based MultiChoice is bringing pay-DTT to several African countries.