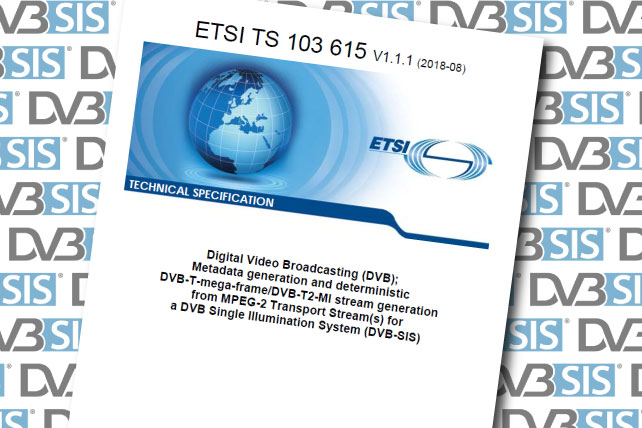 The Single Illumination System developed by the DVB Project has been published by ETSI as TS 103 615 V1.1.1. The specification was previously available only as a DVB BlueBook, having been approved by the Steering Board in February 2018.

DVB-SIS allows signals for terrestrial retransmission to be generated from parent signals intended for direct reception by consumer receivers. A typical use case would be the provision of a DTH service using one of DVB’s satellite standards while addressing DVB-T2 transmitter sites with the same satellite beam. In fact, the system allows for the use of parent signals via all defined TS-based DVB standards, be it satellite, cable or terrestrial.

The DVB stand at IBC2018 (1.D81) will feature an interoperability demonstration of DVB-SIS, presented in collaboration with DVB Members Enensys and Nevion. The demo will be based on the use case described above: DVB-S2 distribution combined with DVB-T2 contribution.

A recent DVB webinar provided a detailed outline of the specification and its capabilities. The slides and video are publicly available here.