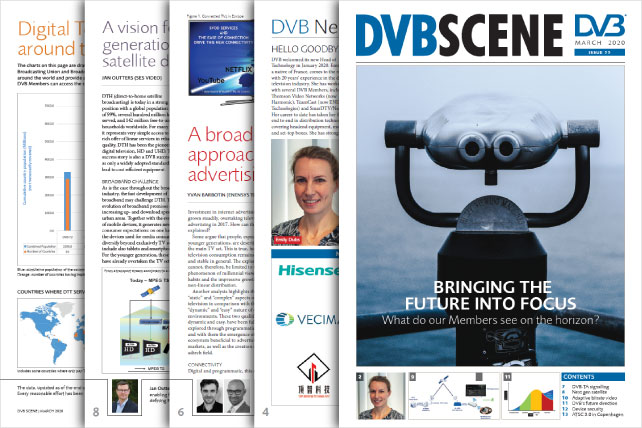 You can now download the March 2020 issue of DVB Scene magazine.

The focus for Issue 55 is firmly on the future, with articles looking at the likely impact of DVB’s newest specifications (including DVB-TA and DVB-mABR) and the options for enhancing broadcast systems – satellite and terrestrial – and device security.

As usual, DVB’s chair Peter MacAvock shares his thoughts on the future direction of the organization itself, acknowledging that it needs to embrace new approaches to ensure its continued success:

For 2020, there will be further changes to DVB’s processes to adapt them to the challenges of developing and validating technology higher in the stack. There will be further emphasis on timely and parallel working to deliver solutions and also trials with new XML-based deliverables, moving away from traditional paper-based specification work.

Read the full article on page 5.