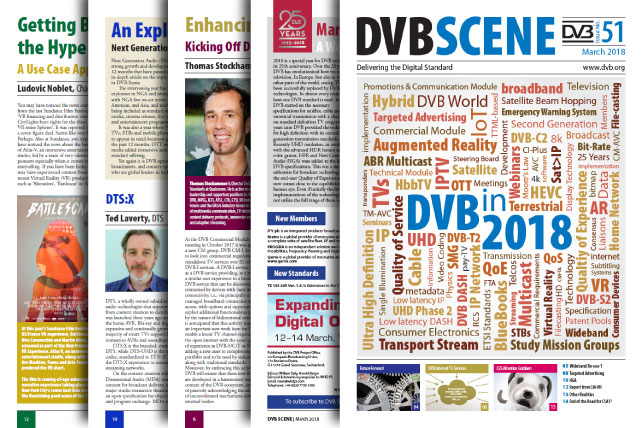 DVB Scene 51: a hive of activity

Twenty-five years after its creation, the DVB Project can justifiably claim to be one of the world’s most successful organisations when it comes to technology standards. With DVB’s portfolio of specifications underpinning the television industry globally, you may wonder what significant work remains to be done. The answer, if the latest issue of DVB Scene magazine is anything to go by, is: plenty!

DVB’s chairman Peter MacAvock describes the organisation’s mission as “to strengthen broadcasting and specify the transition to seamless hybrid broadcast-broadband services and delivery”. In this context there is significant fertile ground for new specification-setting activities. The magazine provides updates on most of the current key work areas, with articles by those who are deeply involved in the relevant working groups.

Most of the topics above are also on the agenda for DVB World 2018, with many of the authors also speaking at the event. Information and registration here.