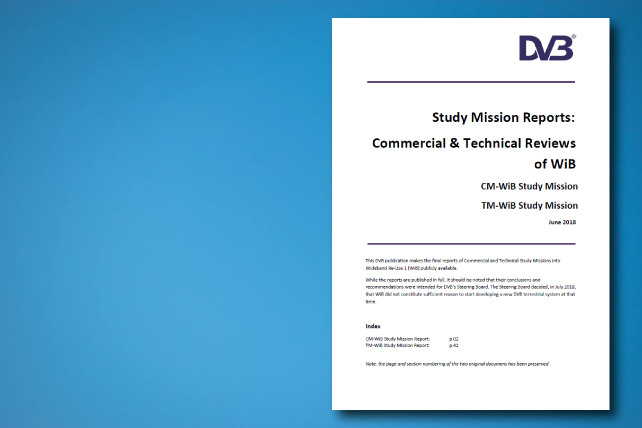 Commercial and technical study mission reports into Wideband Re-Use 1 (WiB) have been published by the DVB Project. At its meeting last July, DVB’s Steering Board decided that WiB did not constitute sufficient reason to start developing a new DVB terrestrial system at this time.

The report of the commercial study mission concluded that there was not sufficient commercial interest to go ahead with WiB at this time. The SB endorsed this recommendation but decided that the two reports should be made available publicly, as they contain significant useful information.

The new technology raised the prospect of cutting capital and operational expenditure for digital terrestrial television (DTT) networks by reducing the transmit power while at the same time increasing the capacity of the overall network. While the technical study mission confirmed that the transmit power can be reduced drastically, the result was not as clear with respect to adding capacity. Depending on the underlying network architecture and boundary conditions, WiB could either increase or decrease the overall capacity.

It was also observed that WiB must be introduced in a wide area simultaneously, with no other terrestrial services at the boundaries. With DTT already on air in many countries, this was seen as a highly unlikely scenario.

DVB will continue to monitor developments in terrestrial transmission markets and technology.