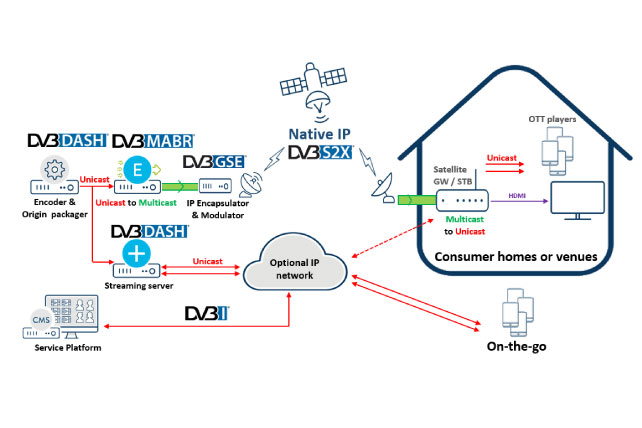 Aside from the introduction of new codecs and formats, direct-to-home (DTH) digital satellite television has not improved much since the mid-1990s: it remains limited to the TV screen, in most cases connected to a bespoke satellite receiver decoder. However, we have now reached the point where the broadcast of live video channels using video packaging formats such as DVB-DASH or HLS can revolutionize video content distribution by natively addressing all types of screens.

At the start of 2020, amid growing momentum, several industry players joined forces within the DVB Project to initiate work on producing commercial requirements for a Native IP specification allowing the delivery, via broadcast means, of media content natively tailored for distribution over any IP-capable network, using the same media packaging formats that have enabled OTT streaming. From unifying systems on the headend side to enabling new business models, and beyond, the benefits offered are wide-ranging, and not only in the context of satellite.

A first important milestone was achieved last summer when the DVB Steering Board approved the commercial requirements for Native IP. This subsequently triggered the creation of the new Technical Module Native IP sub-group (TM-NIP) at the beginning of November, to deliver a specification and implementation guidelines.

Moving from a specification to broad market adoption, however, will not be straightforward. There are understandable fears that the demand for solutions targeting the B2C segment, such as next-generation DTH, may still be many years away. The most common concern is that, for broadcasters, deploying Native IP would require additional transmission capacity for quite a long time on top of the conventional MPEG Transport Stream-based transmissions, until the latter could be switched off.

However, when a new technology proves to be mature, brings benefits to consumers as well as content distributors, and offers good prospects for profitability, the next step for the industry is to identify a viable migration path that permits its early market introduction and the progressive withdrawal of the previous generation.

For technologies that rely on legacy consumer-premises equipment, migration obviously cannot happen overnight. The migration path is usually long, but as with the shutdown of analogue television or video codec and format transitions, the recipe for success is good planning and a willingness to move forward. Given the long legacy the satellite industry has to live with when new generations of TV sets or set-top boxes hit the market, I believe that now is the right time to engage in serious planning activities for introducing Native IP delivery to satellite broadcast.

Most content providers already have OTT streaming playout capabilities that can be leveraged for Native IP distribution via broadcast. When it comes to transmission bandwidth,
a viable migration path could be to reduce the number of live TV channels distributed by satellite (offloading the low audience channels to OTT distribution only) and reuse the released satellite spectrum to simulcast high- audience channels or live events in Native IP, addressing all consumer devices.

Legacy set-top boxes pose perhaps the biggest challenge. Nevertheless, we have demonstrated that the software of eligible set-top boxes can be upgraded to support Native IP redistribution across consumer homes. Native IP satellite gateways could present another solution here.

The vision that drives us is enabling providers to operate all of their broadcasting and OTT streaming with one single distribution platform (as illustrated above; click to enlarge), rather than operating two siloed ecosystems forever. Native IP is a clear opportunity for significant short-term cost savings and greater consumer satisfaction, and paves the way for a successful DTH 2.0!

Jean-Claude Sachot is the Business Development Director for Broadpeak. He has more than 30 years of experience in digital video processing and delivery, and was previously vice president of pre-sales – video CPEs at Technicolor.