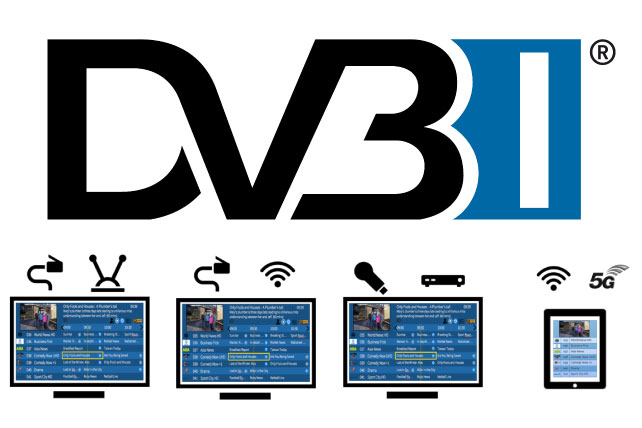 For the most recent issue of DVB Scene magazine, we asked William Cooper of informitv to explore some questions related to DVB-I service lists: what can they do, for whom, and who should manage them? His research for the article, republished below, included conversations with several stakeholders from across the media value chain.

With conventional digital television services, whether cable, satellite or terrestrial, the receiver tunes to one or more multiplexes that carry signalling information about the channels they broadcast. This has essentially limited the discovery of services to specific delivery systems. But what if some or all channels are delivered over a broadband connection, potentially over the open internet?

DVB-I supports services delivered over either existing broadcast networks or over fixed or mobile broadband networks, in any combination. It caters for broadcast and broadband convergence by specifying an online directory system that can describe available services out of band, independent of the distribution network. Using widely adopted web protocols, a compatible device or application can request a list or lists of available services, based on country, language, genre, provider or device capabilities. These can be used to access relevant services or applications and obtain further information about the programmes they provide.

“It’s not a transmission standard,” emphasizes Emily Dubs, the Head of Technology at the DVB Project. “It’s not about delivery. It’s about discovery, a way of harmonizing hybrid services distributed over different networks.”

This approach enables a consistent and coherent user experience, seamlessly integrating broadcast channels, received over cable, via satellite, or over the air, with services that are delivered online, to provide enhanced audio and video quality, regionalization, and special interest or occasional services. It facilitates both free and subscription models. It also supports services delivered on demand. It can enable devices without a conventional television tuner, such as phones and tablets, to access audiovisual services using the familiar model of channels.

DVB-I therefore provides a way of transitioning existing services, currently enjoyed by billions of users, to an internet-enabled future that works with any available network. Significantly, it supports this without requiring changes to existing transmission systems. As such, DVB-I enables an evolutionary transition to hybrid services, without requiring big bets to be placed on next- generation infrastructure.

“We see standardization as a great benefit to the industry because it allows many providers to deliver services across different ecosystems,” says Peter MacAvock, the DVB Chair. “There’s not much rocket science behind it but the implications are far reaching.”

DVB Services Sàrl currently allocates unique identifiers for some broadcast services. However, any list of services, or even lists of lists, immediately raises questions about criteria for inclusion or ranking and opens the door to many legal issues. One possible solution would be a federated system that allows a level of national control of regulated lists of appropriately authorized services, while also permitting users to access other channels.

Regulators like Ofcom in the UK are positive about the potential of DVB-I but are not inclined to pick technology winners, preferring to leave that to the market. Yet in licensing broadcasters and online services within their jurisdiction, many national regulators already maintain lists of authorized services. They are also concerned with ensuring the accessibility and appropriate prominence of public services. Broadcasters may be keen to preserve their current position, rather than compete directly with other non- broadcast services, including those of major multinational media companies. In that sense, regulated service lists may be to their strategic advantage, ensuring that users are able to access their services on a range of devices and displays.

Sky has already brought to market an entirely vertically integrated system in the form of Sky Glass, which has required considerable investment. Some leading consumer electronics manufacturers are offering their own online channel lists with proprietary approaches. Those with market power may prefer to promote proprietary solutions, but the television market has generally benefitted from published standards and interoperability. The risk is that, left to their own devices, consumers will lose the convenience of common standards that have enabled an open and competitive market.

The Digital TV Group in the United Kingdom has yet to adopt a formal position on DVB-I. It is not specified in the latest version of requirements for digital terrestrial television, D-Book 12.6. However, the DTG has developed a DVB-I Test Suite (see DVB Scene #59, page 11), recognizing that interoperability testing will be a critical factor in driving widespread adoption of the standard.

There have been some technical trials among some public service broadcasters in Germany. Generating the appropriate metadata turned out to be relatively simple. There are plans for a further pilot project. The aim is to demonstrate additional value for users, with a hybrid offering, preferably aggregating multiple services. Now the objective is to determine how such a system might operate in practice. The Deutsche TV-Plattform association has a delivery task force which will produce a paper providing possible approaches for introducing DVB-I in the German market.

In Italy, the adoption of DVB-I is being driven by broadcasters that can see the benefits of standardization. The UHD Book 2.0, published by the UltraHD Forum Italia and Confindustria Radio Televisioni, specifies DVB-I support for the discovery of linear services delivered over DVB-DASH, as well as methods to retrieve electronic programme data for those services. This is subject to the ratification of the DVB-I specification as an ETSI standard, which has already been achieved, and proof of concept trials by major Italian broadcasters, leading to the creation of a new profile to be used for the certification of compliant receivers. Once this is in place there will be an 18-month sunrise period for it to become a requirement. Mediaset is leading a technical trial, in conjunction with TIMvision, the online video service of Telecom Italia, with the participation of other partners, including LG, TP Vision and Vestel.

The DVB Project is also building bridges between the broadcast and mobile worlds with the 5G Media Action Group to enable the commercial deployment of television services based on fifth-generation mobile networks. A joint task force is working on the combination of 5G systems with DVB solutions, based on using the DVB-I specification for service discovery.

Many stakeholders recognize the value of technical trials to inform the market. While some seem to be adopting a wait and see approach, one of the attractions of DVB-I is that it does not require a critical mass of services and devices to establish its credibility. It is relatively easy for the various parties involved to gain experience and capabilities, without significant risk or investment. It does not require major infrastructure deployments to develop, evaluate and validate how it could work in practice, in preparation for future developments in television and video distribution.

Dr William Cooper is an independent consultant who has worked at the intersection of broadcast and broadband television and video for two decades, advising on technology strategy and service implementation. He edits the free weekly Connected Vision newsletter available from informitv.com.

This article first appeared in issue 59 of DVB Scene magazine. Find out more about DVB-I at dvb-i.tv.