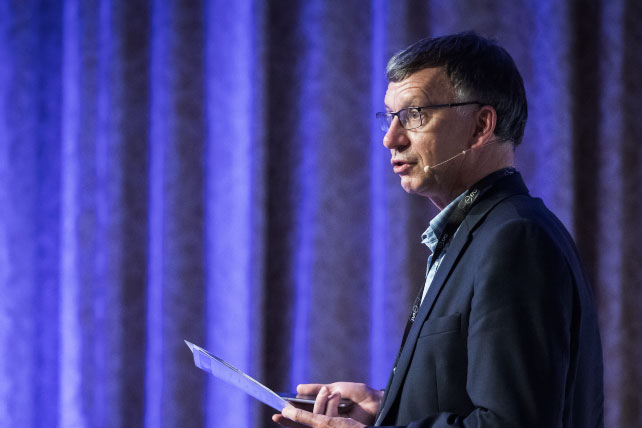 At yesterday’s 2020 General Assembly, Graham Mills was made an Honorary Fellow of the DVB Project. While such presentations are usually made in person, in this case he joined the entirely online meeting from his home in the UK.

Introducing him, DVB chair Peter MacAvock noted Graham’s long association with the organization, dating right back to its first Steering Board meeting in September 1993. A pioneer of interactive services in DVB, he became chair of the Interactive Services Commercial Module, which later became the Commercial Module. He remained chair of the CM until his retirement in 2018, on the occasion of DVB’s 25th anniversary.

Graham told General Assembly attendees that being involved with DVB had been “a memorable and deeply rewarding experience”. He continues to follow the Project’s work from afar:

“Since stepping down from DVB two years ago, I’ve enjoyed seeing many of the work items we were initiating in the CM at that time come to fruition – such as targeted advertising, multicast streaming and, most significantly, the DVB-I family of specifications. Do keep up the good work, knowing when there’s a need to be met and when to stop.”

As an Honorary Fellow is asked to continue to support the DVB Project and, where appropriate, provide advice at the chair’s request. Graham Mills is the eighth person to receive this award. The list of former recipients is available here.