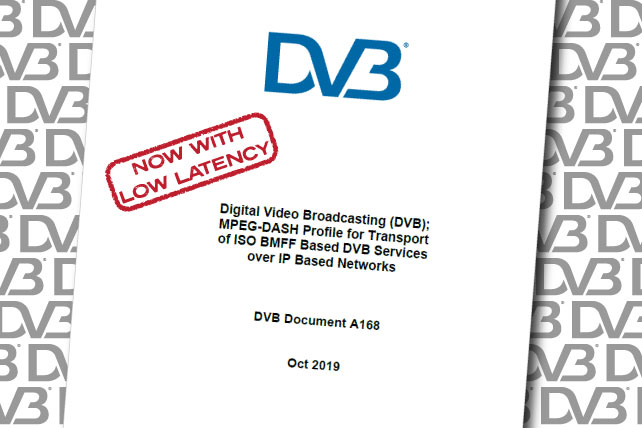 DVB has published the latest version of DVB-DASH, with the addition of a low latency mode. The latter is a key enabler for internet-based delivery of linear television, especially live events, to enable streaming with a delay comparable to that of broadcasting. It will also facilitate personalization of live broadcast content with insertion of internet-delivered content.

DVB BlueBook A168 is now available for download. It has also been forwarded to ETSI and will, in due course, be published as TS 103 285 V1.3.1. While the specification was approved by the DVB Steering Board in July 2019, its publication was delayed owing to the need for editorial alignment following subsequent MPEG meetings.

DVB-DASH builds on MPEG DASH, which was the first internationally-standardized adaptive bitrate HTTP-based streaming solution. To improve interoperability and facilitate implementation for television services, additional constraints and requirements are defined in DVB-DASH. The goal was to satisfy the core requirements for live and on-demand use cases. The resulting standard is a subset of MPEG DASH with a few extensions, along with a set of requirements for the DASH player in the client.

The new low latency mode in DVB-DASH breaks the streamed segments into smaller chunks, which are then delivered as soon as they are available at the encoder. So instead of outputting entire segments at one time, the encoder splits the segments into groups of frames – the chunks – where none of the frames in a group requires a frame from a later group to enable decoding. This approach cuts the end-to-end latency from 20–30s down to 3–4s.

The demonstration of DVB-I services at IBC2019 included first implementations of DVB-DASH with low latency. The specification was only available to DVB Members up to now; with the publication of BlueBook A168, it is publicly available.

> Read more about how low latency is achieved in DVB-DASH (Issue 54 of DVB Scene, p10)