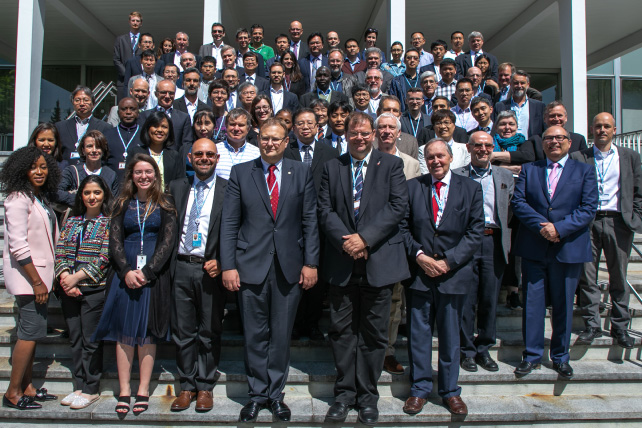 DVB at the heart of Europe’s TV future

More than 80 stakeholders gathered at the ITU (​International Telecommunication Union) in Geneva earlier this month for a workshop on The Future of Television for Europe. Jointly organized by ITU-R (Radiocommunication), ITU-T (Standardization) and ITU-D (Development), the event thus had a very broad scope with the aim of assisting European countries to assess challenges and opportunities related to regulation, standards, and accessibility.

It was clear from several presentations and discussions that DVB will continue to provide the backbone of television services in Europe in future, albeit complemented by emerging 5G networks. The strength and importance of DTT platforms was highlighted in the presentations from Hungary’s National Media and Infocommunications Authority, France’s Forum AudioVisuel Numérique and Broadcast Networks Europe (BNE).

Speaking on behalf of BNE, Jean-Pierre Faisan stressed that DTT, whether using DVB-T or (increasingly) DVB-T2, will remain popular in most European countries for the foreseeable future. He highlighted the high penetration of user equipment, universal coverage, high and predictable Quality of Service and the absence of “gate keeping”, of particular importance for public service broadcasters.

The increasing importance of broadband as a delivery channel for television and interactive services was another key theme at the workshop.

DVB’s Head of Technology Peter Siebert explained the role that the emerging DVB-I specifications are set to play. By allowing broadband-delivered television services to be signalled and distributed in a standardized manner, the need for a specific app can be avoided. He observed that users don’t know or care whether a service reaches them via broadcast or IP − DVB’s aim is to ensure there can be a single consistent user experience for all services.

While DVB-I is still in development (with the first specifications expected later in 2019), hybrid broadcast-broadband platforms are already a success in several European countries, based on a combination of DVB’s broadcast standards and HbbTV.

Xavier Redon Hernandez (Cellnex) explained how Spain’s LOVEStv platform brings together several broadcasters to offer an excellent user experience to terrestrial audiences. Initial results have been very positive: the blue button is pressed monthly on 17% of TVs that show the invitation, with 71% using it for 7-day catch-up and 24% using it for “start-over” viewing.

DVB’s role was also mentioned in the context of improving accessibility. BBC’s Nigel Megitt noted that there has been convergence around the use of web standards for content accessibility. For DVB, this has resulted in the new TTML-based subtitling system, that enables distribution of TTML subtitles together with audio/video content via broadcast.

The presentations from the ITU Workshop on the Future of Television for Europe are available from the ITU website.