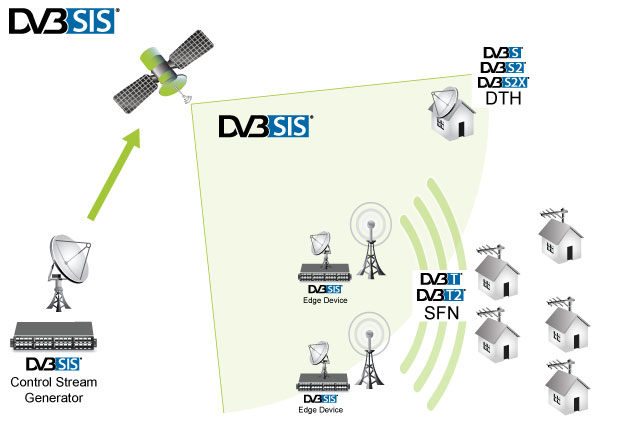 Last week’s 88th meeting of the DVB Steering Board approved a new technical specification for a Single Illumination System. The system allows for the combination of DVB-T/T2 contribution and DVB-S/S2/S2X distribution in a single satellite beam. The specification has been published as DVB BlueBook A175 and will now be sent to ETSI for publication as an ETSI Technical Specification.

In addition to being widely used for direct-to-home (DTH) broadcasting, satellite is very often used to feed the transmitters in digital terrestrial television (DTT) networks, a process known as contribution. In both cases satellite is typically the most cost-efficient mechanism for signal delivery, owing to the wide area coverage provided.

Ideally the signals used for DTH distribution and DTT contribution would be identical, so that one satellite transponder would be sufficient for both applications. This concept, called Single Illumination, was previously not possible since terrestrial transmitters expect a signal compliant to the DVB-T2 Modulator Interface (T2-MI) specification. This provides the timestamps required to synchronise several transmitters in a Single Frequency Network (SFN). Furthermore, even if the T2-MI signal could easily be derived from the underlying Transport Stream, DTH satellite receivers could not process it.

Network operators and network equipment manufacturers came together in DVB to identify a technical solution for a Single Illumination System. The Technical Module, based on commercial requirements defined by the Commercial Module, created a technical specification titled “Metadata generation and deterministic DVB-T-megaframe/DVB-T2-MI stream generation from MPEG-2 Transport Stream(s) for a DVB Single Illumination System”.

In line with the commercial requirements, DVB-SIS signals can be received by all DVB-S/S2/S2X receivers while simultaneously feeding DVB-T/T2 networks.

A demonstration of DVB-SIS will be mounted at next week’s DVB World 2018 event in Warsaw, with support from DVB Member Enensys. There is still time to register for DVB World.