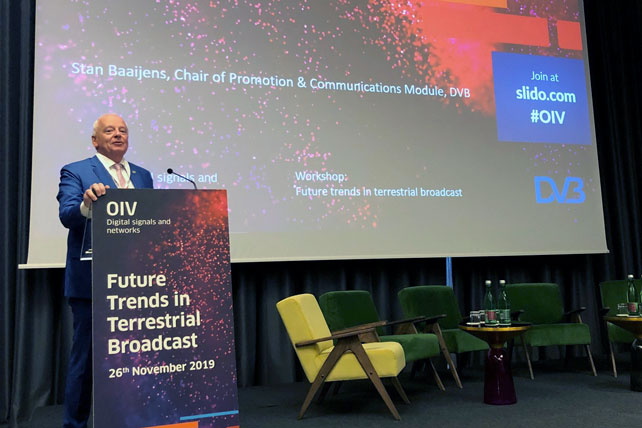 More than 130 broadcast industry professionals from Croatia, its neighbouring countries and even further afield gathered for yesterday’s workshop in Zagreb on Future Trends in Terrestrial Broadcast. The event was jointly organized by DVB and the Croatia-based broadcast and telecoms operator OIV.

For OIV, the aim was to focus on the opportunities and challenges that come with the transition from DVB-T/MPEG-2 to DVB-T2/HEVC, targeting television industry stakeholders in the region. One of the drivers for this transition is the release of the 700 MHz band for mobile broadband (LTE/5G), so the aim was also to discuss the possibility of interference between DVB-T2 broadcast and LTE/5G services, exploring existing knowledge and measures for eliminating such interference.

While the majority of the participants were drawn from the Balkan region, there were also attendees from Turkey, Austria, Germany and Spain, as well as a delegation from Indonesia.

DVB is grateful to all of the Member companies who supported the event through contributing presentations and to OIV for the smooth handling of all logistics. Lunch at the workshop was sponsored by Rohde & Schwarz, while the coffee breaks were sponsored by TRedess.

> DVB World 2020 (9-11 March, Valencia) will include a session focused on the evolution of broadcast technologies.