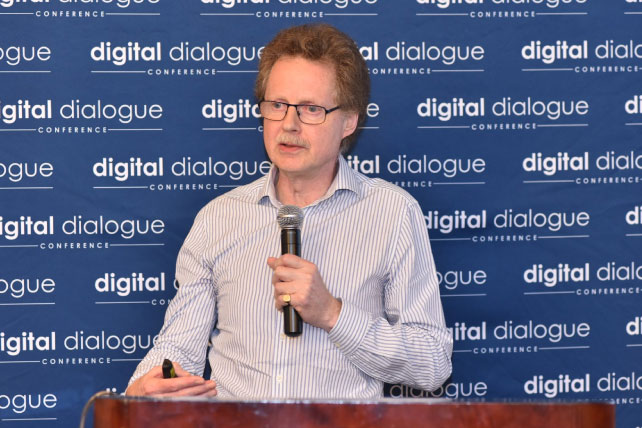 DVB was invited to participate in the recent Digital Dialogue Conference, an annual event that was established in 2012 to create a better understanding of the digital migration and its impact on the African media landscape. It is organized in Dubai by the South Africa-based operator and content provider MultiChoice Africa. Peter Barnett, who chairs the DVB Commercial Module study mission on WiB, spoke on behalf of DVB.

The most relevant part of the programme from a DVB perspective was a panel discussion offering first-hand insights into the successes and challenges associated with the transition to digital terrestrial television (DTT) broadcasting. Peter Barnett provided an overview of key DVB technologies and offered some views on how DTT might evolve in future. He also introduced DVB’s new work on a specification for the delivery of linear TV over the internet, DVB-I.

Peter was joined on the panel by Gerhard Petrick, deputy chair of the Southern African Digital Broadcasting Association (SADIBA), Michèle Coat of the International Telecommunication Union (ITU) and Greg Bensberg of ITV in the UK. Noting that around 30% of the world’s countries had completed analogue switch-off by 2017, Michèle Coat mentioned Mauritius, Tanzania, Kenya, Morocco, Tunisia, Namibia, Rwanda, Mozambique and Malawi as being the leaders in Africa in that regard.

Gerhard Petrick concluded the discussion panel by stressing the importance for African countries of completing the switch to DTT. He said that failing to deliver a digital dividend will have a significant negative impact for the countries concerned. The spectrum released by the digital migration “will play a critical role in providing broadband wireless access and allowing citizens to participate in the economy”.

DVB Members can track data on the global implementation of DTT via our regularly updated DTT database.