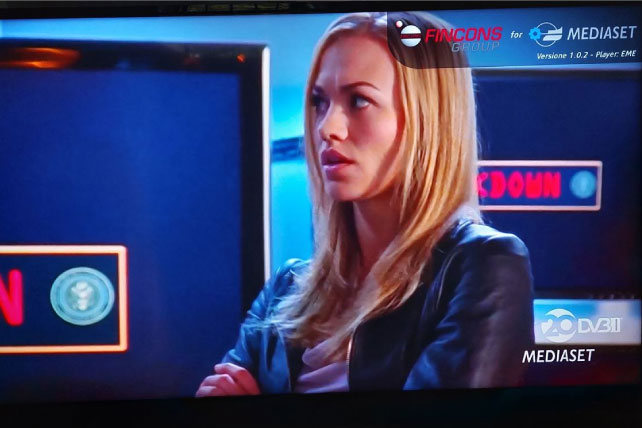 Developing a DVB-I strategy for broadcasters in Italy

Having recently presented the results of our DVB-I proof of concept (PoC), a set of technical tests and developments that started in 2020, Mediaset is now ready to proceed with a market trial in the field, expected to start in 2023. This article sets out the motivation behind our DVB-I activities and the objectives of the market trial.

DVB-I is the natural evolution of broadcast television: from mass media to personal media, unifying the user experience of the broadcast model (one-to-many) with that of the unicast model (one-to-one), closer to the internet world, completing the cross-platform hybridization of TV 4.0.

DVB-I therefore, with reference to the traditional television-viewing experience, allows broadcasters to assert themselves more easily in the modality that belongs to them, by definition, providing ‘broadcasting services’ also through IP technology with many more advantages than the alternative method of streaming through dedicated apps. It allows a user experience very similar to traditional broadcasting with, for example, zapping between linear channels using the remote control (thanks to the implementation of logical channel numbering, LCN), or by direct switching from over-the-air channels to thematic and personalized services coming via broadband IP connections. Such content can be delivered at a significantly lower and more scalable cost than over-the-air transmissions, without abandoning the usage model of traditional television or requiring the launch of applications or widgets.

In this context, therefore, the publisher’s brand extended to distribution on DVB-I retains its guarantee of protection and brand trust towards the end user. This is the same trust already earned from viewers through the dissemination of programmes over traditional broadcast channels. Extending, rather than changing, the user experience, DVB-I brings to the broadband world the set of services already widely characterized and known in the broadcast world: protection of minors and minorities, publisher identification, access to scheduled programmes’ associated metadata (title, network, synopsis, schedule, etc.), catch-up services supporting interactive functionalities (like on-air programme restart), targeted advertising, user profiling, guaranteed quality of service, and much more. All these features are available on the main screen under the full control of the traditional remote-control experience.

Here we see the real strength of DVB-I, as well as the more purely economic aspects deriving from lower internet distribution costs for those channels with reduced audiences, compared to the cost of transporting them on over-the- air broadcast networks. The weakness of DVB-I, on the other hand, lies in the lost privilege of traditional broadcasters: access to the DVB-I platform is no longer their exclusive prerogative. The platform can also be used by third-party, online-only FAST (free ad-supported streaming television) publishers. These are globally operated through broadband networks and can enter domestic TV sets through the internet and be selected directly by the remote control without launching any special apps.

DVB-I is therefore also a formidable gateway capable of providing access to home TV sets for third-party publishers, not necessarily broadcasters, who offer their television channels online and across borders, using this technology. Precisely for this reason it is more than ever necessary to guarantee fair and regulated access to the emerging DVB-I platform for new publishers, especially online. This includes, for example, regulating access to this new platform with equivalent rules, rights and conditions to those already applied to national broadcaster publishers, as has been the case since the early days of television. It also means binding the use of the current LCN numbering to broadcasters that already have it under licence, avoiding unnecessary conflicts on access to television channels due to duplicated or arbitrarily assigned numbers.

From standard to services

On the technological side, with the publication of DVB-I as an ETSI standard in 2020, it was necessary to work immediately to establish commercial requirements and technical specifications shared across Europe’s television systems. The launch of experimental services by European broadcasters would stimulate the growth of DVB-I and the development of compliant smart TVs on the market.
To do this, Mediaset supports the technical profiling initiatives that HD Forum Italia (HDFI), together with Confindustria Radio Televisioni (CRTV), conducts through the publication and constant updating of the UHD Book collection, to ensure the correct DVB-I profile in future smart TV receivers on the market. We have seen similar activities elsewhere in Europe, such as through the DTG in the UK and the Deutsche TV Plattform in Germany.

It is essential that broadcasters demonstrate their interest in DVB-I technology to TV manufacturers by announcing precompetitive market trials such as that recently announced by Mediaset for the Italian market.

DVB-I is by far the most promising technology to allow broadcasters to guarantee viewers the best transmission quality of their present and future linear channels by overcoming the already significant limitations of the electromagnetic radio spectrum. In addition, it is the only experimentally tested technology that enables an indistinguishable, consistent and functional user experience that combines broadband with DTT and satellite transmissions.

Over the past three years, our PoC has extensively validated and verified the main use cases shown in the illustration above. The increase in project partners from three up to 12 showed the real interest in collaborating on the development of this technology. The sharing of the PoC results at various international events has generated significant interest both in Italy and elsewhere in Europe.

We are now in a position to move into a new implementation phase in the field, enabling verification of the entire DVB-I supply chain, while maintaining in parallel a development activity to test new DVB-I use cases supported by the additional functionalities in the emerging 2.0.4 release of HbbTV.

Our forthcoming market trial of DVB-I takes DVB-I out of the laboratory and into the field, making it accessible to a progressively increasing number of real viewers and broadcasters, with a voluntary ‘self-recruiting’ method. The market trial targets the DVB-I capable TV sets that will be available from next year on the Italian market. It is reserved for manufacturers that have actively participated in the PoC or who intend to join from now on with their own compatible products. As of now, devices from at least four different brands are expected to be available.

The basic hypothesis is to promote an activity specifically dedicated to professionals: manufacturers, integrators, operators, institutions and authorities. It will enable the development of the necessary technical and functional skills in an end-to-end environment, verifying the entire distribution chain, including metadata nodes like the CSR (central service list registry) and content servers. The initially low availability of compatible receivers on the Italian market in 2023 also implies a low impact on the costs and criticalities of OTT distribution infrastructure (CDNs), etc.

There are several tactical and strategic reasons to activate a DVB-I market trial in Italy. One key driver is the possibility to use the IP platform to deliver linear services with more advanced video and audio formats than can currently be delivered through the DTT platform. The HEVC video codec can be used to deliver to DVB-I capable smart TVs, which can then fall back to the legacy format and codec on DTT if not connected to an IP network.

Through the market trial, Mediaset intends to bring together other broadcasters, operators and content providers to test the emerging DVB-I technology as a means of implementing the true hybridization phase of television. Today in Italy, because of the refarming of the 700 Mhz band, many local and regional broadcasters have had to stop or reduce their DTT transmissions due to the limitation of spectral resources. Despite this, they continue to provide linear broadcast services by streaming channels through their HbbTV apps. These operators already distribute their channels via CDNs using IP technology. They are thus perfectly eligible to test the DVB-I distribution model.

The main objectives of the market trial are as follows:

To activate the market trial, Mediaset will prepare some of its main channels to be distributed also in IP mode, including via ABR multicast based on DVB-MABR. These services will use a progressive FullHD broadcast format, thanks to the use of highly efficient codecs, which will be deployed in multilevel and low- latency adaptive mode. These channels will be offered with a dedicated channel numbering scheme.

Marco Pellegrinato is Standards & Innovation Director at Mediaset and Vice-President of the HD Forum Italia. He has been active within the DVB Project for more than twenty years, with a particular interest in television broadcasting and Interactive standards and technologies. He is a member of the DVB Steering Board.