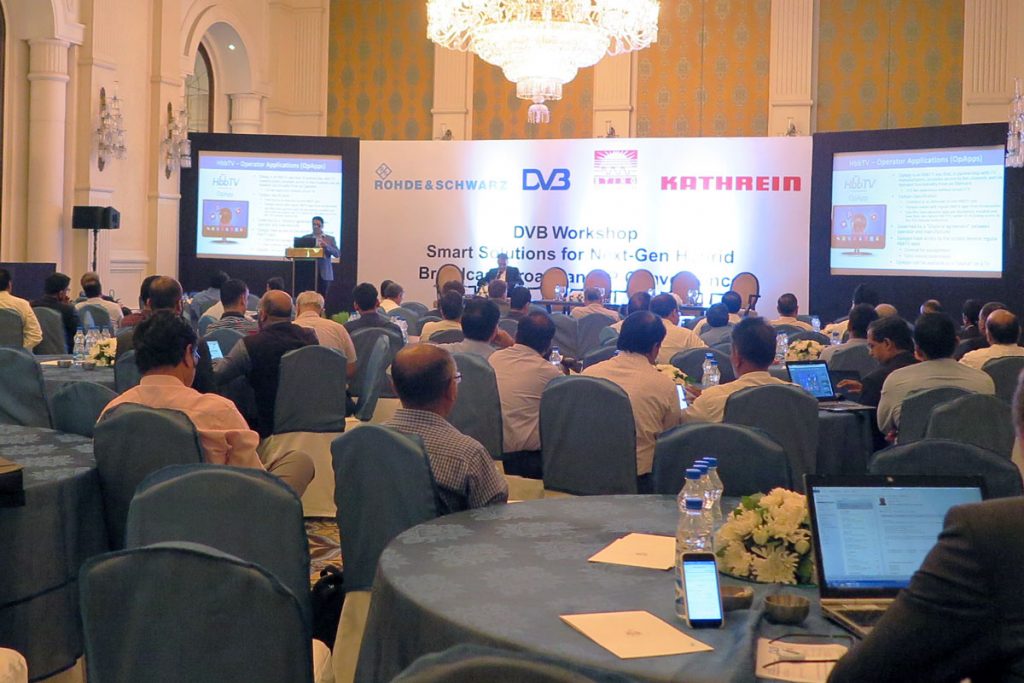 Considering a converged future for media delivery in India

DVB hosted a one-day workshop last week in Delhi, exploring the potential roadmap for India towards mobile broadband-broadcast convergence. The workshop was attended by over 100 people, including representatives of the public broadcasters (Prasar Bharati and Doordarshan), along with private broadcasters, regulators, government bodies and broadcast equipment vendors.

India is a heavy user of DVB’s cable and satellite standards: DVB-C and DVB-S2 are used to deliver more than 800 television channels. The country has also adopted DVB-T2 for terrestrial services. However, while transmitters have been installed in major cities, the service is still experimental for now, with only a few services on air.

Before investing in a wider roll-out, decision makers wish to gain a better understanding of how digital terrestrial television (DTT) will evolve and the relevance of future 5G technology. The DVB workshop, organized with the support of DVB Members, was thus designed to provide information on the potential of DVB-T2 and how it can be complemented with 4G and 5G technologies.

The use of DVB-T2 as an overlay technology was outlined, with a focus on its strength for broadcast delivery. Presenters pointed out that mobile broadband is best suited to unicast and – for limited numbers of viewers – multicast delivery. Indeed, Release 14 of the 3GPP specification already paves the way for this, by making mobile broadband more broadcast-friendly. Broadband-broadcast convergence is becoming a reality.

Nevertheless, it may take some time before the necessary standards are in place. 5G specification development remains focused on the unicast mode at present; the first broadcast specifications will not be available before 2020, if at all. And once the specifications exist, it would take up to two more years before the first equipment appears on the market. A mass market roll-out of a broadcast-capable 5G network with significant coverage is thus still several years away.

The EU’s 5G-Xcast project is developing necessary inputs for the standardization process. Satellite will also form an integral part of 5G networks, providing backhaul service to 5G base stations in rural areas.

The workshop also focused on interactive broadcast services. HbbTV has been successfully applied in many markets and is used for a variety of different applications. It will continue to evolve, often hand-in-hand with DVB specifications. For example, targeted advertising will offer broadcasters the opportunity to increase revenues by enabling viewer-specific targeting.  India’s public TV broadcaster Doordarshan has announced its intention to start a proof-of-concept for HbbTV.

The event, which took place in Delhi’s Leela Palace hotel, was well received by the audience, covering the right topics at the right time. In addition to appreciating the relevance of the information, many participants remarked on the fact that the presentations provided factual information rather than exaggerated, inaccurate or misleading marketing statements.