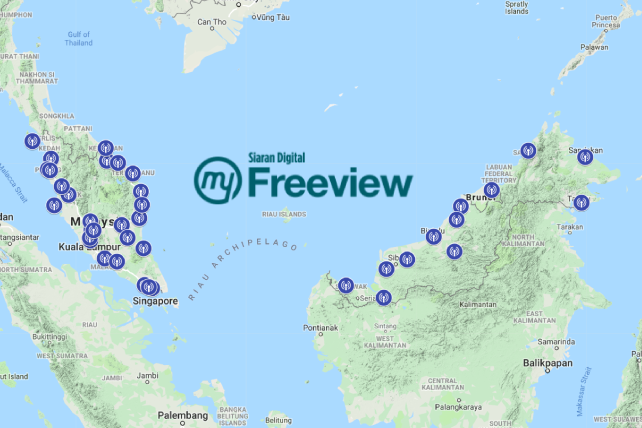 Analogue switch-off under way in Malaysia

Malaysia’s analogue switch-off (ASO) is on track for completion by the end of September. The process is being undertaken region by region following a successful pilot on the island of Langkawi in late July. The final two regions – Sabah and Sarawak – are scheduled to complete the transition on 30 September.

The DVB-T2 service in Malaysia was officially launched in June 2017. Branded myFreeview, it today offers 13 television channels, six of which are in HD, along with six radio channels. myFreeview is run by MyTV Broadcasting Sdn Bhd.

There are a total of 44 transmitter sites covering the country, with two headends, the Digital Multimedia Broadcasting Hub (DMBH) and the Disaster Recovery Centre (DRC). The services are delivered in two multiplexes.

It is anticipated that the myFreeview platform will expand further in the coming years, with additional channels to be added, including from foreign content providers. Interactive services are also planned.

To aid the transition, around 2 million free set-top boxes have been distributed to low income families. For others, while many have chosen to purchase new TV sets with an integrated DVB-T2 tuner, they also have the option of purchasing set-top boxes directly from MyTV for RM 187 (approximately EUR 40). There have been reports of set-top boxes being available on the market for as little as RM 50 (EUR 10), although buyers are advised to look for the sticker indicating they have been approved by the Malaysian Communications and Multimedia Commission.

Extensive information and education campaigns have accompanied the ASO process, although MyTV CEO Michael Chan has accepted that awareness remains a challenge. “Having been leading the transition for four to five years now, we just assumed that everyone knows the ASO is going to happen,” he says in an interview with Digital News Asia. “But that’s not entirely true. We come to certain pockets of the population like Langkawi and we discovered that some communities do not know about this. I think educational awareness is key.”

Malaysia has a population of 31 million, with 7.3 million TV households. Satellite is the most popular means of reception, with a primary penetration of 70% in 2018 according to Digital TV Research. Terrestrial (digital and analogue) accounted for 18%, with IPTV at 12%.

(Follow news about DVB-T2 deployments around the world by joining the DVB-T2 LinkedIn Group.)