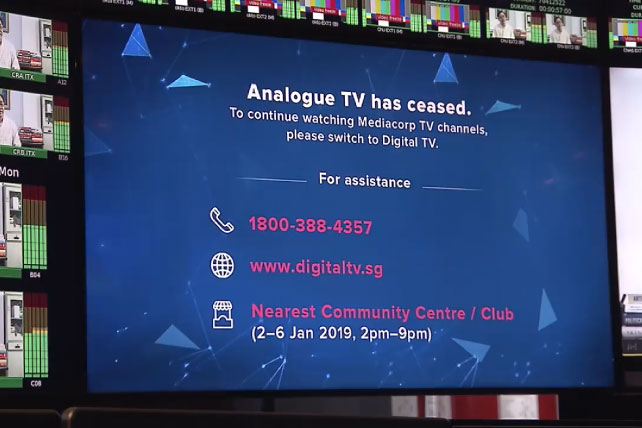 The analogue television era came to an end in Singapore on 2 January 2019, with only digital services now available. The DVB-T2 platform, which was launched in 2013, offers free-to-air programming in HD and (where available) surround sound, complemented by catch-up TV and video-on-demand using the HbbTV-enabled Toggle Red Button service.

To ensure that all citizens can complete the switchover, low income households have had the opportunity to apply for a free digital starter kit, consisting of a DVB-T2 set-top box and antenna, or to redeem a discount voucher against the purchase of qualifying equipment, such as a smart TV. The IMDA (Infocomm Media Development Authority) says that 450,000 households have so far taken advantage of the assistance scheme. The deadline for applications has been extended to the end of March 2019.

While pay-TV, whether over cable or IPTV, is found in around 60% of households, terrestrial remains a very significant platform in Singapore. Figures from research company Ampere predict that it will grow from its current penetration of around 40% to above 50% by 2022.

Singapore joins more than 65 countries that have completed analogue switch-off. Malaysia, Singapore’s neighbour in Southeast Asia, plans to complete the transition during 2019. DVB Members can access detailed information about the status of DTT deployment in the DVB Worldwide section.