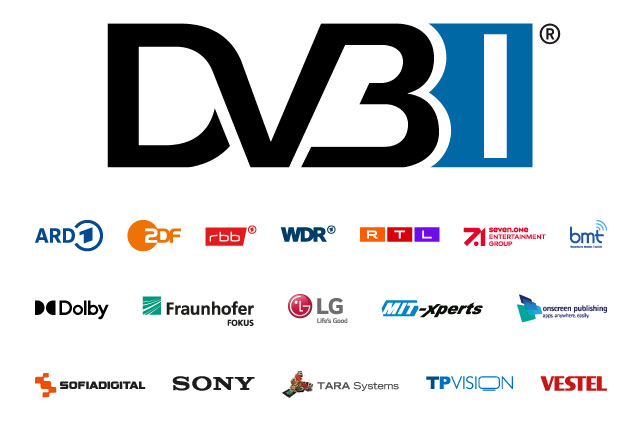 Stakeholders from the media industry, including broadcasters, device manufacturers, software providers and research companies have today announced the start of the “German DVB-I Pilot”. The project, with 19 organizations involved, aims to develop a common understanding of the capabilities of DVB-I and of a standardized future scenario to include the complete DVB-I ecosystem. The initiative will showcase first results during IBC, on the EBU’s stand in hall 10 (10.D21) and at the stand of the DVB Project in hall 1 (1.B73), from 9 to 12 September in Amsterdam.

Below we republish in full an article that appears in the latest issue of DVB Scene magazine. In it, Remo Vogel (rbb/ARD) provides more details on the pilot. The magazine also includes a report from Italy, where the Mediaset proof-of-concept for DVB-I is now set to be followed by a market trial. Mediaset’s Marco Pellegrinato provides the details (see pages 8–9).

For broadcasters, DVB-I offers a way to maintain our sovereignty over content distribution. Our world is changing fast: on the one hand we see video-on- demand gaining importance, while on the other, IP-based distribution is also becoming more and more important for live television. Aggregators are working with new business models, and super- aggregators are trying to expand their coverage to linear video as well. We need an open and standardized way to reach our audience’s devices in the future. This is exactly the point where DVB-I comes into play: it extends classic broadcasting with over-the-top technologies in a very clever and hybrid way.

ARD has been running a technical pilot for some time to gain initial experience with DVB-I generation and playback. At the same time, we’ve been having intensive discussions in various places on how the partners in the market cooperate and what the introduction of DVB-I might look like. That was the motivation for us to take the next step. With an alliance of several participants, we are assembling the building blocks for a national DVB-I scenario.

We have set ourselves three criteria. First, we want to show an additional benefit for users. Of course, DVB-I works as transparently as possible in the background of the TV set; in the best case, the user does not even notice the device switching back and forth between broadcast and broadband. Beyond that, however, we have completely new possibilities that go beyond the limitations of classic broadcast. Therefore, we are adding additional services such as playlists, temporary event streams and features like NGA (next generation audio) to raise the television experience to another level.

The second criterion is the hybrid mode. Even though DVB-I works on IP-only devices such as desktop PCs or mobile phones, it is very important for us to show hybrid operation in real TV sets. The combination of broadcast and IP transport is an important feature for us. DVB-I allows the prioritization of the reception mode. This gives us as broadcasters a tool to control the process of digital transformation ourselves.

Thirdly, it is important for us to demonstrate cooperation between public service media and private programme providers. Sometimes the emphasis is different, for example in the use of DRM (digital rights management).

As a broadcaster, we primarily make our programmes and the associated data available. For the pilot, we need a complete setup. This includes the creation of service lists and streams, aggregation, and the integration of a CSR (central service list registry). The DVB-I clients have special significance, since their implementation must fit our features and our understanding of the standard. We are very happy that we can work closely with some major vendors on this.

The service lists of the individual providers must be combined (see illustration below). We have set up an aggregation service for this. This aggregator generates a national service list. Each provider sends its list to an aggregation API. The service validates technical consistency and adds them to the national service list. Regions and LCNs (logical channel numbers, which define the order of services) are maintained separately on the aggregation service, so we can ensure homogeneity. This also corresponds to the understanding in the DVB-I specifications of a regulator list. The content guides, on the other hand, are delivered in a distributed manner, so that each provider can ensure up-to-date data and we have no problems with caching and latency.

Regionalization is a particular challenge. Germany has different states and within the states there are different regions. On both levels, ARD provides individual programmes and regional variations for these. Altogether this makes 28 different television programmes within ARD that have state/region-specific content. In addition to this, there is also an even higher number of regional commercial television programmes. This situation makes the regionalization of service lists, and specifically the regionalization of the ordering within the service lists, an important aspect of the offer. Consequently, this is also a relevant aspect of the introduction of DVB-I and therefore has become part of the pilot.

The DVB-I standard foresees the option to define regions within a service list and to associate distinct LCN lists with each region individually. This is the mechanism we are using within our pilot to demonstrate the capabilities of DVB-I with regard to regionalization, based on a small number of six different regions plus one national LCN list.

With the mix of providers and focal points, we can cover many different aspects in the pilot.

HbbTV – the integration of HbbTV plays a crucial role, enabling the realization of additional services, barrier-free services, the integration of media libraries, and targeted advertising. Only a service with functioning HbbTV signalling is a complete service. This also applies to DVB-I, which is why we pay attention to client implementation.

DRM – broadcasters have different business models, so digital rights management in combination with access to subscription services is an important feature. When switching to one of our DRM-protected programmes, an HbbTV application is launched to manage DRM handling and decryption.

Event streams – temporary special events are a common occurrence for broadcasters, for example, live event streams for major sporting events. DVB-I offers us the possibility to include these live streams as regular channels in the service list. When the channel is deactivated, we show an out-of-service banner.

Playlists – another form of integrating video-on-demand are playlists, which are displayed in the channel list as a service. This gives us an interesting possibility to bring particularly valuable content back into a linear usage situation.

Media library – there is increasingly mixed use of linear television and on- demand content in media libraries. We look at the user journey across the board. That’s why some services have a content guide that links to the media library, allowing the user to navigate directly from the programme guide to other videos on a particular topic. The media library is then started as an HbbTV application.

Radio – as we also distribute ARD’s radio programmes over satellite, we include radio in our DVB-I service lists. Anyone who thinks that this is the wrong format for the big screen is mistaken: we enhance our radio programmes with entertaining and informative visual radio applications. Here, the listener can find additional information about the music being played or the news. We have added radio services for the pilot but only on an experimental basis for now, because we don’t yet have MPEG-DASH for radio. (Radio live streams are mainly distributed via Icecast or HLS.)

In addition to all of the above, there are many more features. Almost all programmes can be received hybrid. There is an experimental programme with low-latency DVB-DASH and HEVC. Instance prioritization and fallback switching are supported. Naturally we offer an EPG and the now/ next banner. And an NGA programme will demonstrate dialogue enhancement.

The most important task at present is to agree on a common understanding of the value of DVB-I, with all market participants involved. So far, not everyone is aware that we have a special opportunity here to make television fit for the future, an opportunity with long-term significance.

Before we can consider a market launch, there are still some interesting questions. For example, the relationship between broadcasters and aggregators needs to be clarified. Two different scenarios are conceivable. On the one hand, aggregators could offer their own service lists. These would be limited to the services offered by the aggregator. Another approach would be for the broadcaster to include the aggregators as service instances in their own list. In this way, the aggregators would also function in a national list.

The aim of our pilot is to get this whole discussion going. It tests implementation proposals for a market introduction scenario and shows which questions still need to be clarified. Once these goals
are achieved, we will end the pilot. For a subsequent DVB-I launch, it is important that all stakeholders share the vision and a plan for the next steps.

Remo Vogel is responsible for the strategic development of distribution technology for Rundfunk Berlin Brandenburg / ARD. His focus is on hybrid systems for programme publication. He is co-chairing the EBU HbbTV & DVB-I group.